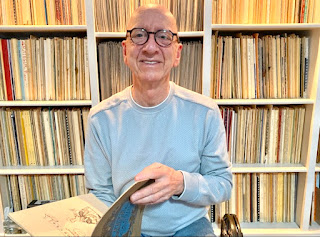 I guess it was about a year ago, I attended a local book and ephemera show, when I spotted a dealer with a huge lot of sheet music, for sale. I had recently gotten into collecting Coloradocentric pieces, and was amazed at the incredible state-published offerings this particular dealer had.

The seller was a gentleman named Tom Merry, and we quickly became friends, with our mutual appreciation of esoteric Colorado music-related collections. A few months later, Tom invited me to his home, where I got a chance to see, in person, his massive collection of sheet music. I was curious to learn what drew him to such an interest:

What was the first piece of sheet music you remember seeing? Did it make a particular impression on you?

I didn’t pay much attention to sheet music as a kid. I grew up in a somewhat musical family so it was always lying around the house, kind of like magazines. For a while my parents made me take piano lessons (from my sister), so I wasn’t particularly fond of my music books and what they represented. I quit lessons as soon as I could and gleefully left the sheet music in the rack.

How did you “get into” actual sheet music collecting? How long have you been collecting, and what piece started your “official” collecting quest?

I re-discovered the piano in college (in the 1970s) but realized that I wasn’t all that interested in playing the standard repertoire. Plus, I wasn’t that good a pianist so I figured that if I was playing obscure works it would be harder for my listeners to detect my mistakes! Once I started looking for stuff to play, the search and discovery became almost as fun as the playing. Fast forward a few years and one day I realized that I had enough music to gift every inhabitant of a medium-sized town. I never intended to collect music. I was just curious.

What is it about sheet music that you enjoy? What keeps you collecting?

It’s changed as I’ve aged. I started out looking for good tunes written at a skill-level I could play. I found a lot of really good pieces (and others that are understandably obscure). A lot of them came with interesting back-stories. On one level, music is our emotional history, expressing how we ‘feel’ about the events of our lives and cultures, rather than recounting names and dates. Print music is one source document for how that story is told. It was a surprise to me (though in retrospect it shouldn’t have been) that many sheet music collectors aren’t musicians; they’re history buffs.

Where do you normally find pieces for your collection?

Everywhere. I started by visiting music stores and when they started disappearing, I broadened my search to antique malls, used book stores, estate sales, and eventually/inevitably on line. This was also a time when people started getting rid of their parents’ sheet music collections, so there was a lot of interesting stuff out there, and prices were low. I once found a rare score for a viola concerto in a tray of tools at a roadside flea market.

Do you have a favorite piece?

One of the first pieces of sheet music I intentionally searched-for was a piano-reduction of an LP called Gate of Dreams, by Claus Ogerman. Written in a sleek mid-20th century style for jazz combo and orchestra, it was something that I wanted to play with my friends. We played it—many times—in my living room, and I still pull it out to play on my own. In my humble opinion it’s an over-looked masterpiece.

Do you have a particular piece of sheet music, which eludes you? What is it?

I don’t have one elusive piece, but many. I’ve always been fascinated by music that mixes classical and popular styles, especially jazz. Gershwin is probably the poster child for this genre, but there are many others who explored that space with really interesting results. Unless a work is especially popular, most music is printed only once and press runs for these hybrid works were usually small, which makes them fairly scarce.

How many pieces of sheet music are in your collection?

I have about 30,000 titles in my personal collection. Most of it is for piano solo, piano duet, or 2 pianos/4 hands. Thankfully, it doesn’t take up as much space as would a book collection of the same size.

Do you have any other music-related/non-music collections, of which you share the same passion?

Fortunately, no. I have other collections but none that I pursue like sheet music.

You collect Colorado-published sheet music - what got you into that particular emphasis?

Part of my college education was at Emory University in Atlanta. One of my lasting impressions of the people I met while there was the remarkable sense of place they had—geography was such an important part of their identity. As a child, my family had moved frequently so I didn’t have that kind of connection and the generic suburban neighborhoods where I spent my teens were not especially memorable. I came back to Colorado wanting to discover or develop some of that geographic identity in myself. That didn’t directly translate into collecting Colorado music, but it eventually clicked-in with my interest in history and the story-telling aspect of music.

What is the oldest piece of sheet music (Colorado or other) in your collection?

I think my oldest piece of Colorado music is "Sleighing Song," composed by Frank H. Thomson with lyrics by the mysteriously-named R. It was published 1874 by J.B. Cofield (412 Larimer Street, Denver) who is identified on the cover as a “Dealer in Pianos, Organs and Musical Merchandise." I suspect that Mr. Cofield purchased the music and added his information as a promotion—the 19th-Century equivalent of passing out branded calendars or pens. But it’s only a guess. 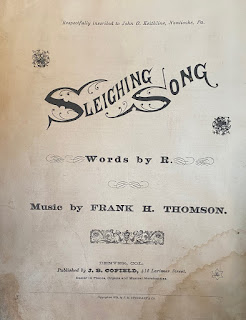 My oldest piece of sheet music, in my collection is "Harness Me Down with Your Iron Bands" (The celebrated Song of Steam!), from 1847. The composer H. A. Pond is familiar to me as a composer of salon music, but I’ve not encountered George Cutter (the poet) before. It was published in Cincinnati. The store stamps are from New Orleans. The song is sung by a personification of (the power of) steam.


I’ve no muscle to weary, no breast to decay,
No bones to be ‘laid on the shelf,’
And soon I intend you ‘go and play,’
While I manage the world by myself.
But harness me down with your iron bands,
Be sure of your curb and rein,
For I scorn the strength of your puny hands
As the tempest scorns a chain. You are also a sheet music seller - what trends have you noticed with buyers? Do they collect by song, by region, etc?

I started selling sheet music in an antique mall (in the 90s) and people were typically looking for music to share with their parents—or for scrap-booking. Nowadays, people asking for “old music” are often looking for vintage rock-n-roll. Online resources have made vast amounts of music available at minimal cost and maximal convenience, so the overall demand is way down. What’s been lost is the ability to browse for interesting music that you may not know exists. I see that as my (very small!) market opportunity.

Is there a certain demographic you have noticed with buyers of sheet music - older, younger?

To greatly over-generalize, younger shoppers typically look for music to play; older shoppers tend to look for music to collect. That impression is partly due to what I have in stock. It’s like feeding wild birds: who’s at the feeder will depend on what’s in the tray. I’ve attracted a fairly diverse audience, but since I’m in the secondary market with older stock, my customer-base also skews older.

Do you worry that sheet music collecting will die out, with its collectors? If so, what can be done to prevent that from happening?

Collecting (of almost anything) tends to be an activity of older people. With luck, we all get old, so there will always be collectors. Collectors also tend to be idiosyncratic, so it’s hard to predict what will be of interest to future sheet music collectors. I do think that as digital resources expand, the pool of sheet music collectors will shrink—but never go away, just as the advent of e-books has not been the end of book collectors.

What tips do you have for a beginner sheet music collector?

Follow your passion and indulge your curiosity. Pay attention and learn about what you’re doing—that’s one of the things that separates collectors from hoarders. Pray for a long life so you can sort it out later.

What would you eventually like to have happen to your collection?

I suspect many collectors hope that some library or museum will one day swoop in and want it all—it would be a validation that what we’ve accumulated has value and significance for someone besides ourselves. In reality, that doesn’t happen very often. Having seen large collections unceremoniously dispersed, I’ve come to realize that I need to take such matters into my own hands. No one (except me!) is going to want my whole collection, so I’ve been researching and making a list of who might want what. That process has actually been fun, as it’s connected me with a lot of other collectors and resources. The world of collecting sheet music is definitely a small pond, but bigger and more diverse than I had realized.
Posted by Lisa Wheeler at 6:49 AM