Who Needs a Toaster, When you Can Have a Liberace Record? 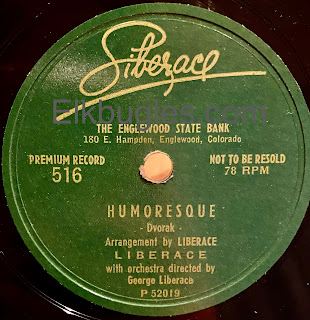 I love making obscure connections between Colorado music items and well-known entertainers - take for example this give-away record by the Englewood State Bank, from the one, the only, "Mr. Showmanship" - Liberace.

And you thought banks only gave away toasters!

Found this record in a Denver thrift. Very cool, previously-unknown discovery! There is no date on this freebie, but the original commercial release of this record was 1954. There can't have been too many of these given to local bank customers, so I'm guessing this Colorado record is a pretty scarce find.

The address shown for the Englewood State Bank (180 E Hampden) is now an eye clinic.

Liberace would often perform in Colorado. Staying at the Broadmoor, in Colorado Springs. In 1956, he visited Littleton, to crown the winner at the Centennial racetrack.

Then, as is usually the case, I found another similar Colorado record - for Denver's Bowman Biscuit Company. It just so happened that Bowman was the local sponsor of Liberace's national television show, in the mid 1950s. 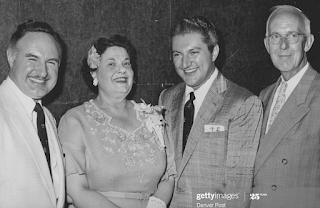 (July 11, 1954) Piano artist Liberace played host to a group of Denver civic leaders and representatives of the press, radio and TV at a Saturday luncheon at the Park Lane hotel. Pictured here are George Liberace, brother of the pianist: Mrs. Hazel Oberfelder, sponsor of Liberace's Sunday night Red Rocks concert; Liberace; and Marshall Harris, vie-president of the Bowman Biscuit Co., which sponsors the pianist's program on a Denver television station.
Credit: The Denver Post (via Getty Images) 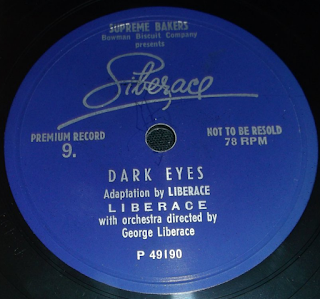 Apparently there were several of these promotional Liberace records pressed, for other cities, which included premiums for local banks, furniture stores, shoe stores, grocery stores, and even a canned meat company! While most featured the song "Humoresque," I found other promotional discs, with "Dark Eyes" / "Lullaby" and "Minute Waltz" / "Blue Danube." 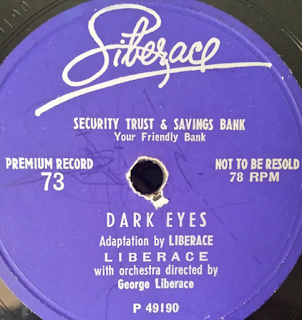 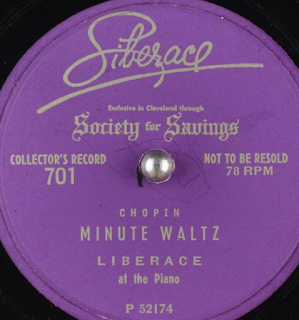 Liberace promotional release by Society of Savings, Cleveland
Posted by Lisa Wheeler at 8:02 AM