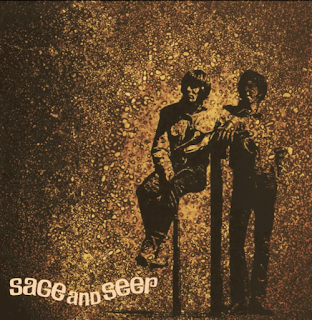 Previously, only those collectors with deep pockets could afford the original pressing, which has sold for upwards of $400. The album is expected to be released in March, and will be available at the Wah Wah store, in Barcelona, and (thankfully) by order on the Wah Wah discogs page.

Often described as "folk-pop-psych," Sage and Seer's sound has vibes of breezy baroque, which often compares this record to Donovan and the Left Banke. 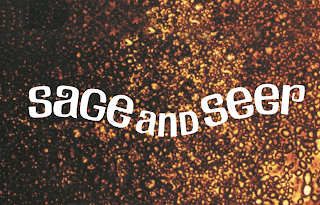 I had a chance to talk to both Sage and Seer's David Rea and Wah Wha's Marc Argenter about the project.

David - What are your thoughts about the album being reissued more than 50 years after it was, originally?

We were shocked and surprised that Wah Wah wanted to reissue it. Of course, we were flattered, too, that anyone would want to bring Sage and Seer back into the light of day, or that they believed there might be a market for the LP. Earlier, in the late 1980s we became aware that there were fans out there, trading/selling cassette tapes of the album. People in Texas and Finland, Seattle and elsewhere. It was very strange. But strange in a good way.

David - What do you remember about the original recording of that album?

We’d been in recording studios before, to record our first single, some demos and, one time, to prepare something for a songwriting contest (we didn’t win). But Jackson Sound had a massive studio, large enough to accommodate thirty or more classical musicians, a rhythm section, and Don and me, all playing at once on a couple of songs. So it was exciting. I don’t recall being nervous, which is odd because we had little experience of playing live with others.

Joe Jackson, the studio owner and engineer, was very nice to us, which was helpful. We were young, just out of high school. Some of the songs had been written when we were 16 or 17, Looking back, many of the lyrics seem a little world-weary for teenagers to be singing, but we obviously meant it at the time. Maybe it had to do with the 1960s (we had Vietnam and the draft to worry about), or was reflective of what music we were listening to. During our time together, we wrote dozens of songs. Many of the ones selected for the record were part of a song cycle of sorts. Other tunes were chosen more by whim than calculation. Neither of us were capable of doing musical notation, so I remember sitting in an office at Stylist Records, day after day, slowly playing the tunes while Al Davis put pencil to staff paper. The sessions were fun, but grew more tense as the days wore on, and the expenses mounted. We were kept in the dark, thankfully, about how much it was all costing (plenty), because we weren’t liable for any of it. During post production, our producer suddenly had a bottle of Jim Beam in his car, which he gravitated toward, on the sly at irregular intervals. I figured he knew the album could spell financial trouble for the label. And it certainly contributed to that. 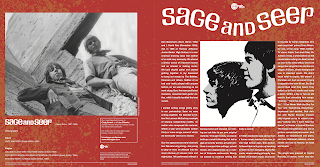 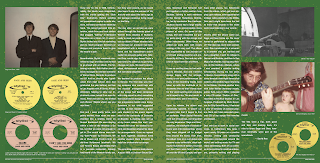 Reissue liner notes (click to enlarge)
While I appreciate the surprise credit inclusion, credit should also go to Mike Stelk.
Craig Swank originally contacted me, and I contacted Mike, who provided the group's contact information to me, which I then relayed to Wah Wah. Craig and I were simply the go-betweens.

Marc - How did you first discover this album?

Jordi Segura, Wah Wah's boss, is always looking for rare records everywhere he goes. He is a bit like a human music encyclopedia, plus we have a small shop specializing in rare, lost in time vinyl records, so when he finds things he's never seen before he always buys them either for his own collection or to offer to the shop's customers. He discovered the Sage and Seer through a collector friend's recommendation. We immediately loved it, it's among the styles we personally like to listen to–we listen to a lot of music thanks to the shop, and unearth interesting things, but they do not have to be necessarily our cup of tea, we may find a record interesting for some of our customers so we think it's a good thing to have on offer, but when in addition to that what we discover fits our own tastes–which are pretty wide, I must say–we like to add it to our catalogue of reissues if possible. This was the case with David Rea and Don Beckmann's LP, so we started our usual detective work to find the artists, which we eventually did thanks to you [see above - I was only the messenger]. David was very nice and open to the idea from day one, we had to sort some logistic difficulties because everything was done right in the middle of last year's lock down and the peak of the COVID pandemic first wave, which delayed the process, but besides that everything went smoothly and finally after a longer than expected wait the LP is available at last!

Marc - Why did you all pick it to reissue?

We are always looking for "new" things to put out. Our label tries to avoid as much as possible the release of records that have been already been reissued many times before, we like to unearth unknown gems. This may not be a good commercial strategy because many people doesn't want to risk on what they do not know–and doing such small editions as we do we cannot invest in a big promotion–but we do think that albums like Sage and Seer deserve to be rescued for new audiences. We make every effort in making quality reissues, putting care in the mastering, design and quality printed materials. We know many collectors will always go for the original copies, but when records are hard or sold for small fortunes like is the case of Sage and Seer we think it's good that there is a reasonably priced quality alternative, plus the bonus we add when possible enhance the original edition. In the case of Sage and Seer, we have added the two non-LP 7" tracks, one at the end of each side, plus an insert with photos and text provided by the duo themselves, so it's a plus that you will not get on an original copy.

David - What happened to Sage and Seer?

Don Beckmann and I basically broke up once the record was released. In fact, I don’t recall us playing together again once the recording was complete. He moved to Greeley, to go to college. I stayed in Denver to finish up the record. If the album would have done anything, I’m sure we would have quickly gotten together to promote it. Stylist released two singles off the LP, the second at the behest of a local disc jockey, who then declined to play it. The whole experience was very frustrating. The record label should have hired a rep to flog the record to radio stations, but apparently that didn’t occur to anyone. Maybe we thought magical thinking was going to save the day. Not that Don and I believed in magic. After Sage and Seer (my mother, who was somewhat mystically inclined and the sister of self-styled spiritual medium, came up with the name, which was better than Me and Him, one of the early contenders), I continued in music, off and on.

NOTE: In 2004, David Rea released a solo collection, Nation of One, which is available for download. It was produced in Los Angeles by Mark Governor for City Sound Music.