June Sproule(s) and Her Piano 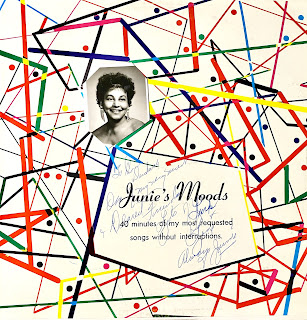 Far too often, when doing research on Colorado records, I run into brick walls. It happens. As was the case with this instrumental LP from June Sproules, Junie's Moods. I couldn't find a thing on this album. I knew there had to be a Colorado connection, given the KCMS catalog number (1272), but I kept coming up with nothing.

I noted that the label showed a Hutchinson, KS home address, which is now a vacant lot. Putting two and two together, I finally solved the mystery. 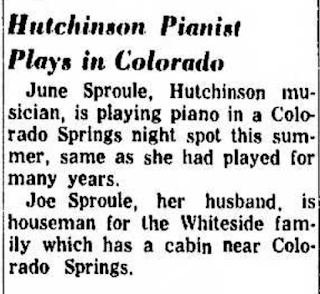 I found references to a June Sproule performing several years earlier, dating back to 1938, so no clue if the woman on this album is her, or a daughter, or some other relative. Apparently a June Sproule was a regular in the Colorado Springs club circuit, when I'm guessing she recorded her album at Bud Edmonds' Manitou Springs KCMS radio studio, during one of her visits.