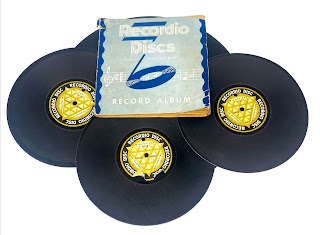 Going through a stack of records, on the last day of an estate sale. The organizer told me to "take them all, or they were going into the trash."

With an offer like that, who am I to turn down free records?

I get home and notice that they all were Recordio discs - home recording discs produced by the Wilcox-Gay Corp., for use on their Recordio machines. Now, these are usually a crap shoot, as they are normally amateur audio recordings of Aunt Mabel sharing what happened at Uncle Bob's birthday party, or kids singing Christmas songs, to mail to grandma. The company went out of business in 1963.

I noticed there was one other in the pile - a 12" reference recording on an NBC record label. The disc showed a 1952 date.

While there is no obvious Colorado notation on here, the label on the record indicates that it was from the "Review in Blue" radio show, which aired on KOA radio, Friday nights at 9:30, and featured the Lowry Air Force base band. The record identifies 13-year old Jerry Robinson, a trumpet player with the Denver Junior Police Band, as the guest soloist.

As you will notice, the record is in almost unplayable condition, but wanted you to hear. 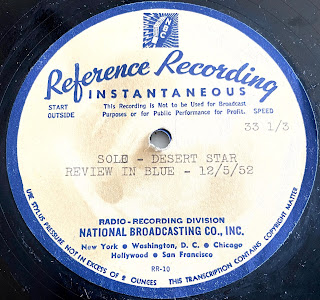 The Denver Junior Police Band was formed in 1937. In 2001 it was renamed the Mile High Community Band. Members wore uniforms patterned after the Denver Police uniforms, with badges and holsters with little silver cap pistols. 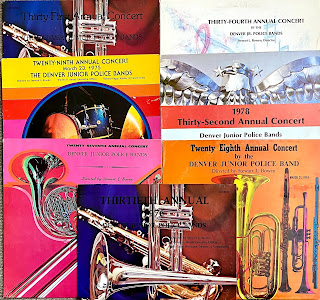 Just a few of the Denver Junior Police Band LPs in the author's collection.