I'm constantly surprised when I find a Colorado record, which has completely slipped through the cracks of my collection. So is the case with this 1981 EP from Leslie Fore. 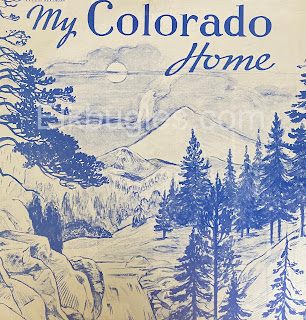 My Colorado Home shows the total of four songs, and not much else. The songs are performed by Thomas Roland. The genre could be described as antiseptic, and very dated. I wish I could offer more of a review, but there really is not much to elaborate here. The lyrics and singing style on this record are more 1931, instead of 1981. No credits mentioned on the backing musicians. I'm guessing that the music is quite possibly a simple backing track, as it sounds almost the same on every cut.

Listen to "In The Garden of the Gods"

Leslie Fore's history is far more interesting, and helps solve the mystery of this album. Born in 1896, Fore was a one-time bandleader, and a dedicated sheet music collector, with an emphasis on Colorado-themed songs. He was also an elevator operator at the Colorado Historical Museum. 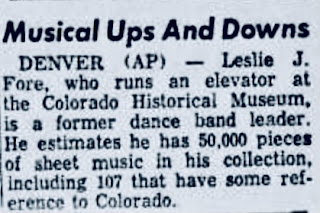 October 6, 1960 - Monroe (Louisiana) News Star
In a 1938 issue of Hobbies - The Magazine for Collectors, Fore placed an advertisement for souvenirs, postcards and novelties. The ad noted his 1525 E. 30th Street home address, in the Whittier neighborhood of Denver.
In 1954, the U.S. Copyright Office showed his Success Music Publishing Company was located at 3151 High Street, near the corner of what is now Martin Luther King Jr. Blvd. and High St.
According to copyright filings, Fore not only collected Colorado sheet music, but he also composed it, dating back to 1922.
1922
"Miranda on the Old Veranda"
1936
"In The Garden of the Gods I'll Wait for You"
1954
"My Colorado Home"
1965
"Angel In My Dreams"
1974
"I'll Wait At the Gates of Heaven"
"You're Gonna Miss Me When I'm Gone"
Sadly, I couldn't find an actual printed piece of his sheet music. I checked with Tom Merry, my go-to on anything sheet music related, and he had nothing related to this composer. The 1936 "In the Garden of the Gods" and the 1954 "My Colorado Home" both show up on his 1981 album, which explains why this disc sounds about 40 years older than it's original year released.
I also couldn't find anything related to Mr. Fore's time as a bandleader.
Fore died in 1992, at the age of 96. He is buried at Fairmount Cemetery (marker below). 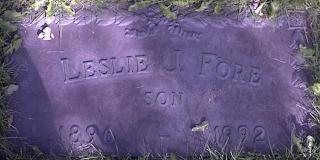