Pueblo Signs on the Air – The Origins of Steel City Radio

In 1919, Colorado Springs amateur radio enthusiast Dr. William D. “Doc” Reynolds, Jr began a short-range broadcast, under the call sign 9JE. A few months later, according to a May 13, 1920 story, titled “Dance Music by Wireless Transmitted by Reynolds,” published in the Colorado Springs Gazette, “Pupils at the High school [didn’t identify which one] who experiment in wireless telephony and telegraphy received the canned music from the home of Dr. W. D. Reynolds last night, and tripped the light fantastic to it with satisfaction.”

Two years after that experiment, the Reynolds Radio Company would launch the first radio station in Colorado, KLZ. The Denver-based station broadcast a 5,000-watt signal, reaching Pueblo, which would not be far behind with its own radio presence.

In 1922, George G. Loewenthal was the first to bring a radio station to Pueblo – or at least a radio license. In the February 1923 issue of The Wireless Age, KFGB was officially listed in the Broadcasting Station Directory. In a February 17, 1923 issue of Radio World, it was noted that there were “six new broadcasters,” who had been licensed by the Department of Commerce, including KFGB, in Pueblo, which was owned by “The Loewenthal Brothers.”

According to the filing, the studio was located at 616-618 N. Main Street, which was also the location of Loewenthal’s electrical contracting and Apex brand vacuum cleaner shop.

While KFGB would be the “first” radio station application, in Pueblo, there is very little known about the station’s programming format, its announcers, or if it even ever went on the air.

Just a year later, in the 1923 Radio Service Bulletin, issued by the U.S. Department of Commerce, KFGB was on a list of stations to “strike out all particulars,” implying that the station was no longer on the air – if it was ever on, at all. The radio call letters would later go to a station in Iowa City, IA.

While there is no documentation that KFGB ever broadcast, and can’t be officially noted as the “first” radio station in Pueblo, there is quite a bit of information confirming that KGDP holds the honors. 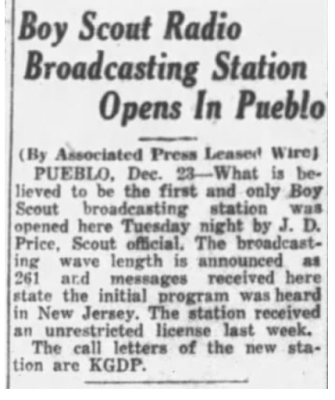 In 1922, KGDP would join the local Pueblo radio dial - as the first and only radio station, in the United States (at the time), run entirely by Boy Scouts.

Heard at 1340 on the radio dial (later switching to 1210), according to a June, 1922 report from the Department of Commerce, KGDP was listed as operating at 2927 High Street, (the residence of John D Price, scout commissioner of Pueblo).

“The station has a recorded distance of 400 miles and occasionally, under favorable auspices, even longer, and sends out programs regularly on Tuesday and Friday evenings. On the first, strictly scouting programs are rendered. On Thursdays programs are arranged with local participants but with an effort to use scouts or scout parents, where talent is available” - 17th Annual Report of the Boy Scouts of America (1926)

According to coverage of the first evening of broadcast, in the Pueblo Chieftain, “Thursday night’s program, as broadcasted by Pueblo scout station KGDP was the first that has ever been broadcasted from Pueblo. This very fact, in itself is a significant achievement…”

The Boy Scout-run station received quite a bit of national publicity, for the unique staffing. The New York Times featured KGDP in its February 12, 1927 edition. “Boy Scouts of Pueblo have their own broadcasting station, KGDP, from which programs are radioed Tuesday and Wednesday evenings. This, so far, as is known, is the only station maintained and operated by the Boy Scouts, although one station is New York City, and one in Kingston, N.Y., and one or two elsewhere, have time to time operated under Boy Scout assistance.”

KGDP would be the model for other scouting organizations, looking to teach members how to operate a radio station. Under the headline Scouts Operate Radio Station, the Hutchinson (Kansas) News reported, in its February 26, 1927 edition, that “Hutchinson Boy Scouts are invited to tune in on their radios for the programs which are being offered every Tuesday and Friday by station KGDP scout-owned broadcasting plant located in Pueblo, Colo.”

The story went on to note that the “executive board of the Pueblo council raised funds to send an older scout to Chicago for training as an operator for the station.” 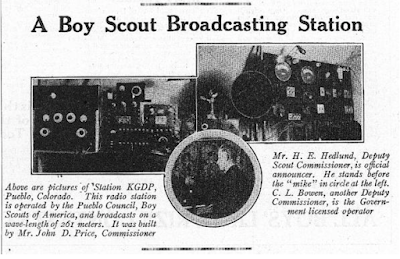 H.E. Hedlund was listed as the station announcer. In the 1927 issue of Santa Fe magazine, He was noted as a violinist and vocalist. Programming on KGDP was furnished by scouts, or their parents. It broadcast on a 261 meter wave and operated on 10 watts of power.

The last notation of KGDP, with the U.S. Department of Commerce, would appear in 1930.

Sweeney ran the Globe Fire Insurance & Investment Co., located at 206 W 4th. He was also listed as vice president of Pueblo Foundry and Machine Co. Walpole listed his occupation as a postmaster, and secretary-treasurer of the Pueblo Club.

No additional information could be found on this station.

On October 27, 1927, the U.S. Department of Commerce issued a license to (later state senator) Curtis P. Ritchie and Joe Finch. Other records show the names Philip G. Lasky and J.H. Albert. J.H. McGill was noted as the news editor. The station would have the call letters KGHF. 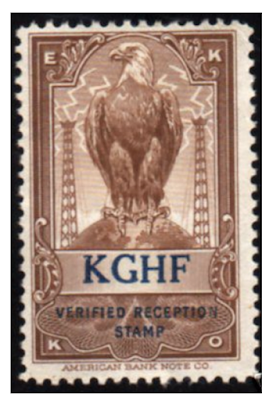 The studios were located in the Broadway Arcade Building. 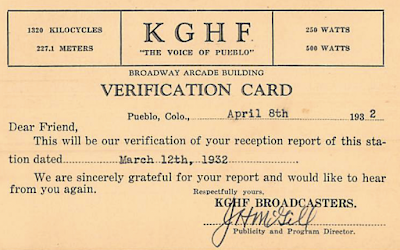 Programming included public affairs shows, featuring John F. Connors, who was also in the Public Affairs Department at Lowry Field. The station also broadcast “You and the Law,” a syndicated program, produced by the Colorado Bar Association. Later, the station would feature live instrumental music from Walsenburg accordion player Mario Carreri, and country music by Jimmie and Dick and the Novelty Boys with Cora Deane.

In 1945, KGHF sold for $300,000. The station was purchased by Colorado publisher Gifford Phillips (of the East Jefferson Sentinel and the Jefferson County Republican).

In an April 25, 1947 FCC application for construction permits for KGHF, it was noted that were “only two stations in Pueblo – KGHF and KADP…and a third station has been authorized – KCSJ.”

KGHF would keep the original call letters until 1964, when the station used KKAM (1964-1976). The station would go on to change its call letters several times, in its history.

Over the next twenty years, there were new radio licenses in Pueblo, implying that KGHF was the lone local Pueblo station, in that time.

In 1947, longtime Pueblo stations KCSJ and KDZA signed on. While the history of both has been well-documented, very little is known about two other Pueblo stations, which applied for, and received licenses for broadcast – KADP and KROM:

Alva B. Adams, Jr. who was the chairman of the Pueblo Bank & Trust, would call his station KADP. It would broadcast at 1490 on the radio dial. The official address on the application was noted (incorrectly) as 102 Arman Avenue (believed to be instead Orman Avenue – and the address of the Orman mansion, where Adams and his family lived ).

For reasons unknown, on October 4, 1948, Adams cancelled the permit, and pulled out of putting a radio station in Pueblo.

Also in 1947, an FM permit was issued to Rocky Mountain Broadcasting Co., (which included Walter Hurd, owner of Hurd Pontiac Co; Carl Walter and Martin Walter Jr., operators of Walter’s Brewing Co., and A. G. Chamberlain, First Federal Savings and Loan Co.), for the station call letters KROM, which would be broadcast at 920 on the dial. The station’s studios were located at 429 Thatcher. However, according to the filing “the permit was dismissed for failure of prosecution.” The original story, in April 21, 1947 issue of Broadcasting, did not elaborate further.