Denver's Whisky A Go-Go (yes, THAT one) 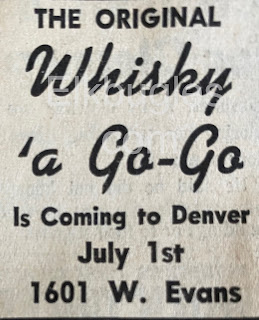 In the summer of 1965, the founders of the famous Whisky-A-Go-Go live music venue, in Hollywood, decided they would expand to other cities. Founder Elmer Valentine, along with Phil Tanzini, Shelly Davis, and Theodore Filer had opened the Sunset Strip location, at the start of 1964 (contrary to popular belief that it was the first, the actual first Whisky opened in Chicago, in 1958).

The founders decided on Georgetown (outside of Washington D.C.), Atlanta, San Francisco...and Denver.

The venue's location, 1601 W. Evans, was home to AAA Builders, Inc., at least according to the city directory. Note another live music venue, Sultan's Table is listed as 1621 W. Evans. This could be a typo, as I found a token from the location, indicating it's 1601 W. Evans (see below) 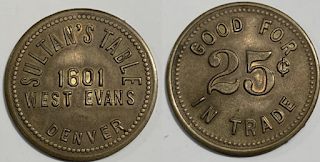 Sultan's Table was managed by Randy King. I found a Billboard story, dated February 1964, indicating that Sultan's Table had just opened. This is confirmed with another story in Music Reporter, published that same month. About a year later, it had apparently closed.

Expansion of the Whisky happened almost overnight, as advertisements for staff started appearing in the Denver Post, in the summer of 1965.

Note the odd hours for the nightclub - 1:00 p.m. to 4:00 p.m. It's quite possible that this is meant to be "interview hours" for job applicants, but it's confusing, all the same.

This is where it gets hazy. There is very little noted on who actually performed at the Whisky. I found a reference to Captain Beefheart and the Magic Band playing there in the fall of 1965. The club also received a mention in Billboard. 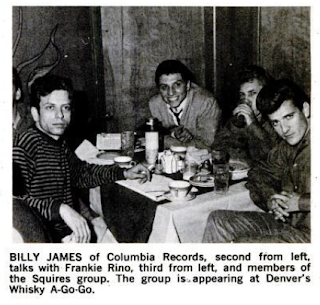 Billboard - December 25, 1965  - Caption: "Billy James of Columbia Records, second from the left, talks with Frankie Rino, third from the left, and members of the Squires group. The group is appearing at Denver's Whisky A-Go-Go."

I found a reference that the Whisky had hoped to attract more local bands, who wanted their name attached to the famous franchise. Which is probably the reason why there seems to be little to no stories or advertisements on any other "famous" acts preforming there. The Denver City Directory confirms that the Whisky was in business long enough to have a mention in its annual records.

But, by 1966, the club was no more. No clue on what happened, as I could find absolutely nothing on its demise. It was quickly renamed Batman's Cave.

However Batman's Cave's end happened about as quickly as it began. The club closed, and became The Bird (note it's believe it was also called The Posh).

The Bird was owned by Francis Salazar (I had been told it was actually owned by Barry Fey, but I couldn't find any reference that was true).  The story goes that after the demise of The Bird, Salazar contacted Fey about keeping the building open as a live music venue, thus becoming the most successful in the history of the location - the Family Dog.

"I ran into the clubs while researching the background on the building," said Scott Montgomery, the co-writer and co-director (along with Dan Obarski) of the fantastic documentary The Tale of the Dog. "The history was a little muddy, but The Posh, The Bird, and the Sultan's Table all came up. Of particular interest was Captain Beefheart's residency at the Whiskey A-Go-Go in 1965. This would have been a very early introduction of progressive music to Denver, as Beefheart was hardly mainstream fodder. It seems that only Lothar and the Hand People were offering 'unusual' rock music in Denver at the time. Beefheart's residency at the Whisky helped set the table for the Family Dog."

Family Dog opened in September 1967.  I'm not about to duplicate anything on that part of the story. Scott Montgomery has done exhaustive research, and I highly recommend you check out his excellent site (and watch the movie!).

I don't pretend to know everything. So, if you have any additional information on this story, please contact me.