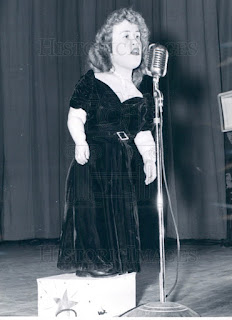 Digging at an estate sale, last week, and discovered this Audiodisc recording of "You're The Cause of it All" by a singer named Betty Finch. There was nothing on it, noting if it was a Colorado recording, but I'm a sucker for these mystery discs.

Put it on a turntable, and discovered it a cover of the 1946 Sammy Cahn-penned (Freddy Martin) song, of the same name. 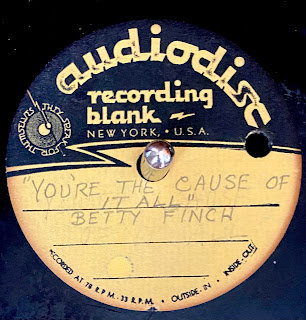 Listen to "You're The Cause of it All" - Betty Finch

A quick Internet search revealed that the singer, Betty Finch, was indeed a Denver resident, with aspirations of being a professional singer. I found a 1939 story noting that she had won a whopping $2,000, as a winner in a movie quiz.

The undated photo of her (above) shows a cutline on the back:

"This is to aquatint you with the forthcoming honorary presentation of an award of merit to Miss Betty Finch, of 4544 Zuni Street. On February 26, Miss Finch, a 3 foot high glamorous young lady will be given honors by Governor Dan Thornton on behalf of Fanfare Community Service, on the occasion of her 150th benefit performance. Miss Finch, one of Fanfare's thirty emcees, also qualifies as a combination vocalist and pianist. She will receive the certificate award at the 1550 benefit show, of the organization at Fitzsimons Army Theatre, with 1500 patients. Betty is a graduate of Boetcher School, in Denver, and has won in several competitions, one of which was the runner-up honors on the Broadmoor Radio Competition."

Governor Thornton served from 1951-1955, which indicates that she probably entertained Korean War soldiers.

Sadly, as is often the case. I couldn't find any additional information on her.