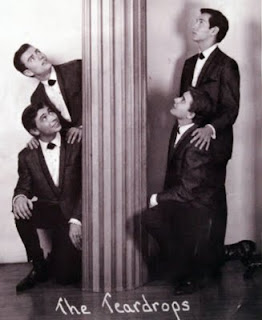 NOTE: In 2016, I authored a story on The Teardrops in The PULP, with additional information.


In 1964, teen bands were plentiful in Pueblo. Almost every school-age kid with a drum kit, or a guitar could be found trying to emulate their favorite bands, perfecting their sound in the family garage, or in the basement.

“Tom Anderson started managing us – that’s when we tried Ernie out,” he said.

Ernie Watta was a Centennial High grad, who Rick and Ange thought would make a better addition to their new band.

“He knew how to really pick a lead, so we had to fire Ed.”

It was Ernie who gave the band its name – after a bit of editing.

“Ernie thought we should be called The Rockin’ Teardrops, but we didn’t really like that, so we took the Rockin’ off.”

During a talent show to promote the Colorado State Fair, the boys discovered Ron Myers, who was set to perform as a solo singer and guitarist.

“We liked him, and asked if he could play bass,” Rotondo said. “So instead of having two acts, Ron just joined us as our bass player.”

The Teardrops had a regular gig at Jerry’s, and were in constant demand at teen dances near town.

“We used to do all of the 50s and 60s stuff – anything that came out, we would play,” he said. “Tom got us the warm up slot for a lot of shows, like Dick Clark’s Caravan of Stars. We got to meet lots of people, including Shirley Ellis, the Coasters, the Larks, and Sam the Sham.

One time we were supposed to be the warm act for Sam the Sham and the Pharaohs, when they played the Colorado Springs Auditorium, but they were stuck in Denver. Problem was, instead of everybody leaving when they heard they weren’t coming, everybody stayed. So we went ahead and did the whole three hours ourselves."

Later the “Wooly Bully” band returned the favor, and played at a Teardrops teen dance at the Armory.

As word spread about Ange and the boys, they quickly discovered the perils associated with adoring fans. 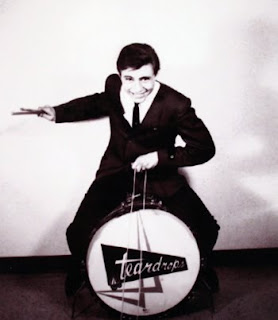 “We just got new suits up the in Springs, these gold lame jackets and tuxedo pants, with these Beatle boots. We were doing a show with all of these screaming girls, and Tom said ‘Don’t go out in the audience,’ but we were thinking these are fans, they won’t do anything, so we went out – and got mauled.”

But that was all about to change. 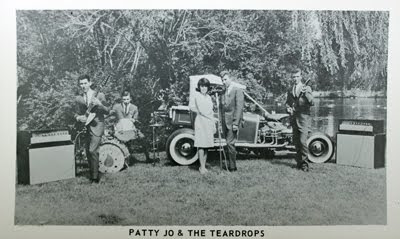 “Ron knew this girl singer, named Patti Jo Martinez. They went to school together at East High. He thought she would make a good addition to the band. Our manager thought it was a good idea."

"Ron and I grew up together since grade school," said the now Patti Jo Martinez Boyce. "He played for me several times when I sang for school assemblies, as my back up. I never heard of the Teardrops until he asked me to audition for them. I thought it sounded like fun." 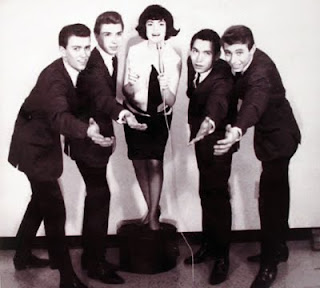 While Patti Jo passed the audition, the female followers of the band weren't too happy with the addition to the group.

"Our female fans didn’t like having a girl in the group," said Rotondo. "And all of a sudden we started having male followers.”

"(Laughs) I never thought of that," Martinez Boyce said. "I was never allowed to mingle with the boys during breaks - ever. In fact, I used to sit in a room during the breaks, and one of the Teardrops would stay in there with me - they were very protective of me, like brothers."

Seizing on the cross-gender fan base, Tom Anderson decided to book some studio time in Denver for the newly billed Patti Jo and the Teardrops. 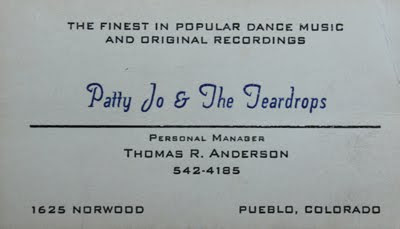 “Tony Spicola was taking an interest in managing her, and making her the next big thing,” he said. “He was also managing The Trolls, at the time.” 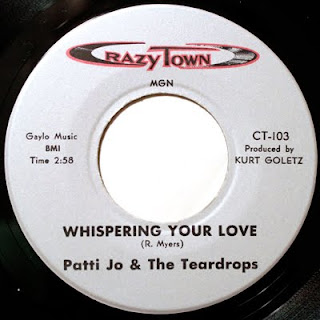 
Released on the Kurt Goletz Crazy Town label (which had previously released singles from The Sting Reys), “Whispering Your Love” prominently features the band’s new female lead, while the flip is an instrumental take on “Sixteen Tons” (Crazy Town 103) 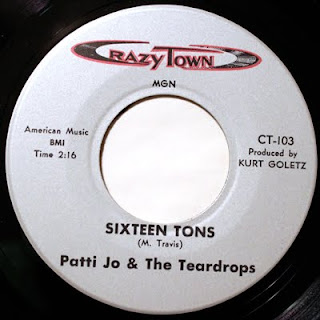 
By the end of the recording session, Tony Spicola had other plans for Patti Jo as a solo act. She would go on to record “I’ll Sleep Tonight” / “Headin’ for a Heartbreak,” at Ray Ruff’s studios in Amarillo. However, after serious consideration, she walked away from performing to marry, and raise a family. She resides in Florida. 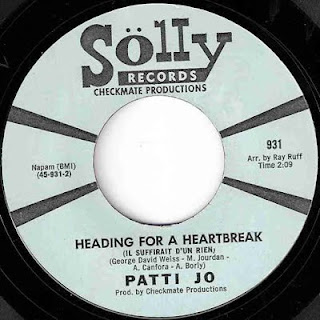 
"I have awesome memories during my two and-a-half years with the group," Martinez Boyce said. "I never dreamed that I would be blessed to experience traveling, having a fan club, playing the state fair, and singing with the cutest boy band in the world (in Colorado)."

But that wouldn’t be the only shake-up in the group.

“Ron called one day and said we had to fire our manager, Tom. Ron was dating a gal at the bank, and she told him that there was no money in our band’s account, so we confronted him, and fired him. We decided to go it alone.”

One of the first things they did was go into the recording studio.

“Ron just got on the phone and called Norman Petty, in Clovis,” he said. We booked time, I think it was about $75 an hour, and recorded our singles."

Traveling down to Clovis, the band recorded the Ron Myers penned “Sweet Sweet Sadie,” and the flip, the Ernie Watta composed, “You Go Your Way.” 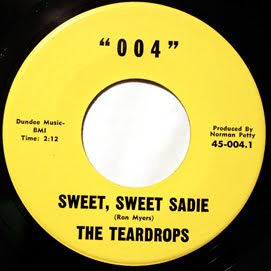 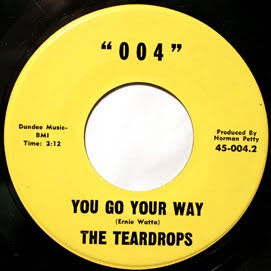 Listen to "You Go Your Way"


"The second time we went up there, we weren’t as prepared. We recorded “Armful of Teddy Bear” (credited to Ernie Watta), and Norman said ‘You guys have a hit on both sides.' Apparently we didn’t know that you shouldn’t have two good songs on a single." 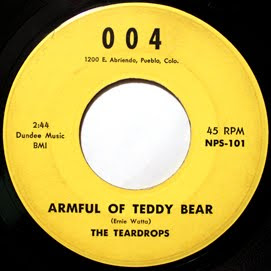 Listen to "Armful of Teddy Bear"


The b-side was “Who are You,” performed (and co-written) by Rotondo. 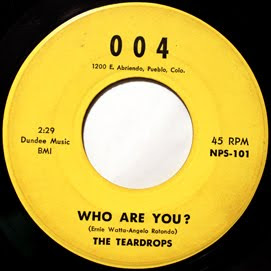 Listen to "Who Are You?"

“I think they had me sing that song because they wanted it to stink,” he said.

The singles were released on the band’s own 004 label.

At the end of the sessions, Ron Myers left the group, got married, and was replaced by Mike Elias, on bass. 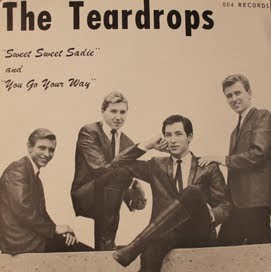 
“The 'Sadie' picture sleeve was shot in front East High School,” Rotondo said. “For 'Teddy Bear' we went to the state fair grounds. Ron arranged for some local knockout girls to pose with us. 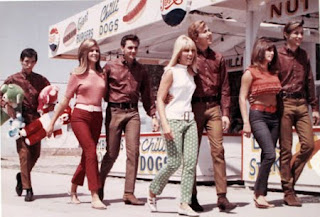 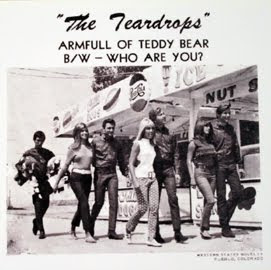 
Rotondo admits that “probably 1500 were produced of each record.” The discs were sold at local stores.

“Back then, grocery stores were selling them.”

Armed with records, and a huge fan base, the band would receive some untimely news - Rick Witcowich was drafted into the U.S. Army.

“He said 'Just keep the band going whatever you do.' So we tried to carry on without him.”

“When Rick got back from the military, we picked up a bass player and a lead, and we called ourselves the Teardrops again, and it just didn’t work. People remembered us, but we didn’t sound like the Teardrops, so after that we dropped the name, and that was that.”

The band officially broke up in 1970.

Rotondo went on to form Guys and Doll with Witcowich. He has since retired after a long career with CF&amp;I Steel.

"You know, if I could do it again, I would not. It was lot of work and I have the memories no one can take away. I am really enjoying retirement."

Rick Witcowich passed away in 2001.

Ernie Watta would later join the band Crushed Velvet with Scott Thomas (later of Starr). He is also credited on his wife Maxine’s hit single “Real Love” (1983). He passed away in California.

Rotondo has not spoken to Ron Myers, and is unsure of his whereabouts.