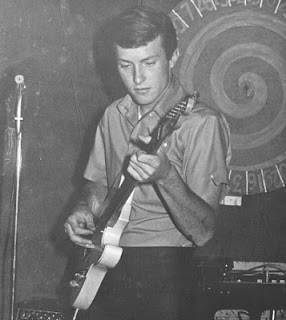 Marty Spritzer’s contribution to the early Pueblo music scene is legendary. As a member of both the Chandells, and later Jade, the guitarist’s influence spans the diverse Southern Colorado rock genres of the 1960s.

But, as with most Southern Colorado rock and roll pioneers, his history starts with polka.

“I was raised on it.  We were surrounded by it when I was growing up, and, of course, I learned how to play the accordion.”

But the popular music of the time quickly eclipsed his family’s expectations that he follow in Myron Floren's or Dick Contino’s footsteps.  At the age of 16, he asked his parents for a guitar.  Armed with a Sears Silvertone, which he learned to play on his own, his musical path would be sealed when a classmate approached him.

“I was a sophomore, when Steve Crockett, who was playing guitar in a school assembly with Del Cunningham, asked if I knew how to play my guitar, and if I could sing.  I told him I did, and that morphed into us playing together.”

After he graduated from Pueblo South High School, in 1962, he and Steve met up with singer Anthony Zamora, who wanted to form a band. With the addition of drummer Ronnie Chandler, they called themselves The Chandells (Spritzer says contrary to the similarity, it is purely coincidental that the name of the band bears a close resemblance to Ronnie Chandler’s name).

“It’s quite possible we were playing off of Tommy James and the Shondells, when we named the band,” he said.

(NOTE:  The Chandells are not to be confused with The Chandelles, the Portales, NM band, which recorded on the Dot label)

The group’s first performance was a gig put together by a friend of Steve Crockett’s. The locale needed a band to entertain a group of people, so the band jumped at the chance to play before a live audience.

“It was at the Colorado State Hospital,” said Spritzer.  “We were playing for the patients.  I’ll never forget playing these fast songs, and seeing the audience really get into it.  But there was this couple, which was totally oblivious to the beat, and there they were, slow dancing to everything we played.  I’ll never forget that.”

Not all of their early gigs would find such a receptive audience—as evident when the band played a Tuesday night at the Honeybucket.

Before the Chandells could establish themselves with their originating line-up, life intervened.

“Ron ended up getting drafted, so we replaced him with Steve Yamamoto, who I had met at Southern Colorado State College, where I was going to school.  Then Steve Crockett left the band, although I don’t remember why, and we found Dave McBee, who had been playing around town.  Then Anthony got drafted.”

The new line-up would also include Gus Trujillo, who was a bartender at Jerry’s Keg Room.

"I was at Jerry's, with my friends Diane and Sherry," said Joyce Wickizer Nielsen. "I remember the exact date, Oct. 11, 1964.  Sherry got mad and left, and Diane and I were stranded, without a car.  Diane had dated Anthony, so she said he could give us a ride home. Anthony told Diane he didn't have a car, but Marty did, so he could take us home.  It was the first time I laid eyes on him. The attraction was almost instantaneous." Joyce and Marty soon became a couple.

More changes would soon come, as word got out that the Hi-Fi Club needed a new house band, after the Sting Reys left.  The Chandells got the job.

"Marty never liked it when he opened at a club, because he got nervous," said Wickizer Nielsen. "So the night they opened at the Hi-Fi, my girlfriend and I sat in the car, outside, so I could hear them."

To look the part of a professional band, the Chandells took a page from another, more established group.

“Our manager, a kid named Richard Rink, thought we should all wear these matching Beatle suit jackets—so we went that way on stage.”

The Chandells would spend the next few years making a name for themselves around town, while aligning themselves with other local bands–including the Teardrops.

“We were all friends with each other,” Spritzer said.  “We would jam with them, and then one day, this would have been 1965, they said they were going back to Clovis, to record their next single at Norman Petty’s studios.  We had a few original songs under our belt, and thought we would tag along with them, and record our own single.”

“I remember taking two cars down there,” said Teardrops drummer Ange Rotondo.  “We recorded our record first (“Armful of Teddy Bear” session), then the next night they did theirs.  That’s about all I remember, as there was a lot of booze involved.”

The Chandells decided to record “Little Girl, Pretty Girl,” penned by a friend of Dave McBee’s, Budge Threlkeld, and co-written by Spritzer, who sang lead on the single.  But when it came time to record, the production lacked a certain element.

“Norman Petty said we needed keyboards on the record,” said Spritzer.  “So that’s him on the Hammond.” 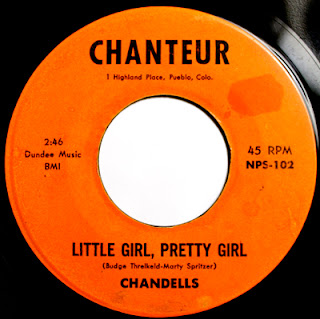 Listen to a sample of "Little Girl, Pretty Girl"

The actual A-side of the record, the psych-pop “We Are The Ones,” was composed by Spritzer and McBee.  The single, with lead vocals by McBee, was the group’s own ode to the band.

The group pressed 500 singles, on the Chanteur label (a play on the group’s name), and sold them at local stores, and gave them out at concerts. 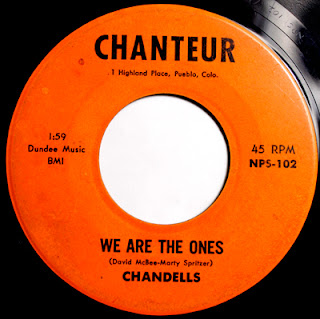 Listen to a sample of  "We Are the Ones"

The band continued to play local gigs at Jerry’s Keg Room, and the Hi-Fi Club but, shortly thereafter, began to disintegrate.

“Gus had a fulltime job, and Dave moved away,” he said. “We tried keeping it together with Roger Uyeda (on keyboards), but we all started going in different directions.  So the Chandells broke up."

Spritzer had a civil engineering degree from SCSC, but music kept calling him.  He kept in touch with Ange Rotondo, after the Teardrops broke up, and the two briefly formed Ange and the Wild Turkeys.

(Marty Spritzer and the story of Jade coming next month)
Posted by Lisa Wheeler at 2:23 PM