Hey all! Found this great newsletter, a while back, while diving around the dollar bins. I filed it away, and then rediscovered it, in a pile of "to get to" papers. I think it was originally stuck in an LP I already owned, but I gladly paid the buck, for this amazing 1975 archive of Colorado country-related memorabilia.

The May 1975, 16-page newsletter (Vol. 1, Issue 3) states that it was founded by Colorado music promoter Dick L.Woods, who worked extensively with Gladys Hart, the Colorado country music promotions queen. He would later purchase Mountain Records from Ethel and Steve Mengee. Interesting to note that, in issue number three, there is a story on how the management of the Review will be handled by Jack and Bonnie Shaffer. 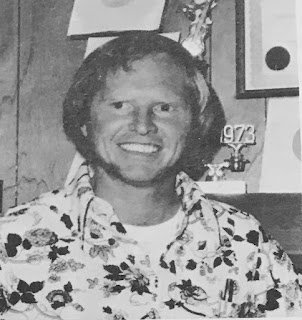 The trail goes cold as to what ended up happening to the publication, after that. 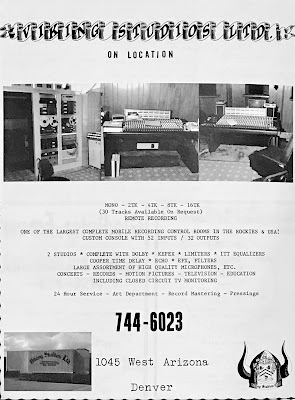 (* Of note: there is a story in the newsletter on the Black Canyon Gang's self-titled LP, produced at Viking Studios) 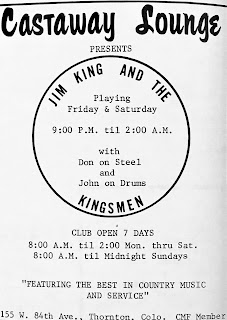 Advertisement notes Jim King and the Kingsmen (with Don on steel and John on drums). Jim recorded for Woods' Mountain Records. 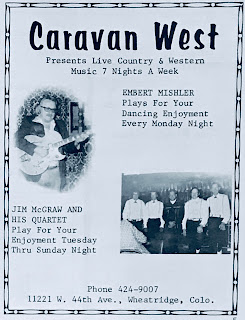 Advertisement notes Embert Mishler along with Jim McGraw and His Quartet. Jim McGraw recorded for Band Box and the Double Nickle labels. Mishler would also record for Band Box, but bounced around other labels, including Big M, Drum City, and Studio 40. 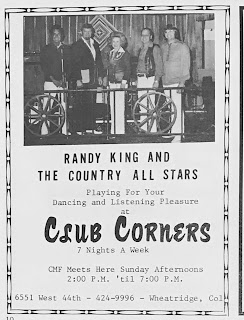 Advertisement notes Randy King and the Country All Stars. King was a prolific country singer, who recorded for the Band Box, Enterprise, Jaybo, L&S, Radco, and Rival labels, along with and Woods' Mountain label. 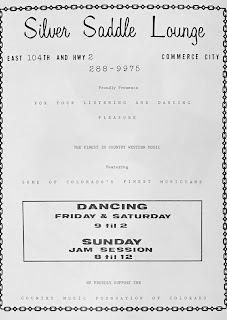 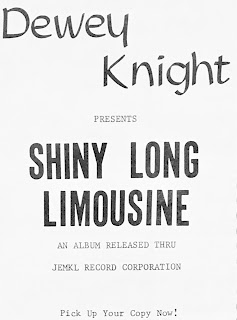 Advertisement for Dewey Knight's LP Shiny Long Limousine (JEMKL 100).
Knight was a regular at the Ramblin' Rose Club, in Denver. 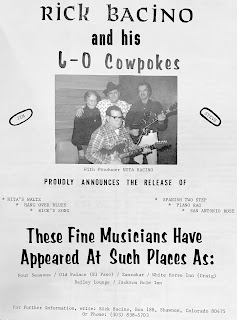 Advertisement for Rick Bacino and his L-O Cowpokes

Rick Bacino and the Cowpokes (picture is with his wife and producer, Nita Bacino, along with Jim Crocker and "Steve") recorded for L&S Records, the same label as Randy King). 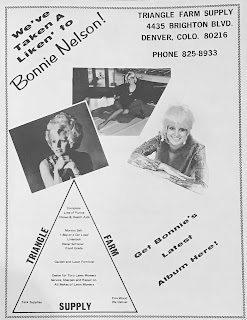 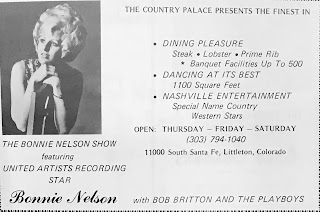 Bonnie Nelson is probably considered the queen of Denver country music. Performing in her father’s restaurant, The Country Palace (note advertisement above), she became the radio spokesperson for International Harvester Company. She left country music in 1997, and became a faith-based singer and leader of Firestorm Ministries, Nashville.
Posted by Lisa Wheeler at 3:29 PM