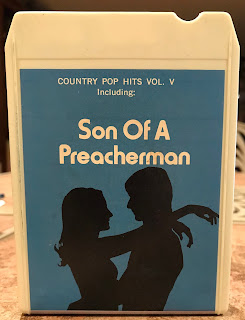 Hey all! So I'm digging around a thrift in Pueblo, when I discovered this "sound-alike" (Top 40 songs performed by studio singers, who attempt to sound like the original artists) country and pop music 8-track sandwiched in between a Herb Alpert album and a Firestone Christmas LP. I was about to throw it back, when I noticed the back of the tape showed a Denver address. 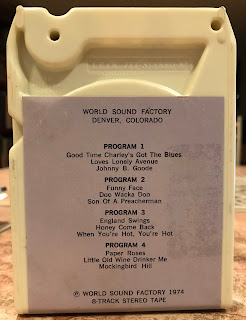 I know, I know, it's not vinyl, but the obscure Colorado music geek in me wanted to learn more...

It appears the company may have also had a West Coast office, as a 1974 Billboard ad for the company shows a Los Angeles area code.  Also of note, a 1974 Bakersfield, CA newspaper ad, with the Denver address, makes note that "factory direct prices" for the tapes cost $2.47, with a list price of $6.98.

The tape I found, Son of a Preacherman, shows it is "Country Pop Hits Vol. V," which implies there are, at least, four others out there. As is usually the case, the studio singers are not credited.

I found no earlier (pre-1974) mentions of the World Sound Factory. There were no further mentions of company, or the tapes, after 1974.

Then, a couple of days later, I'm back at the same thrift in Pueblo, and spot this - a handful of 8-tracks from a Colorado Springs outfit called Pikes Peak Tape: 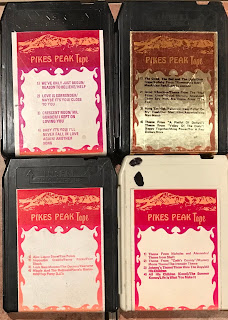 I put the Carpenters Close to You tape in, and realized it was actually the "real" version of this LP, which was apparently bootlegged by the company. Further internet sleuthing indicates that Pikes Peak Tape was based at 1409 S. 8th, and was active around the same time as the World Sound Factory (1973-1974).

The catalog numbers on the tapes are pretty high (the Carpenters tape is noted as "181"), so I can't help but wonder if there are hundreds of Pikes Peak tapes scattered about. Most of these tapes found their way in truck stops, sold as budget music to drivers needing an audible boost on the road.

I found it odd that both of these Colorado-based companies, with apparently no connection, began and ended production, around the same time.