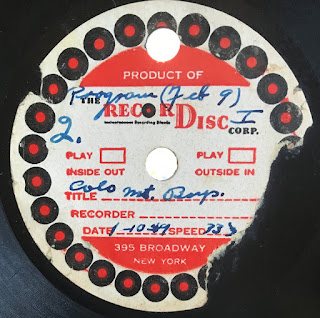 Hey all! Very excited to post this latest find. So, I was out thrifting at the local Goodwill Outlet, when I spotted this beat-to-shreds acetate in the bins. How it managed to stay in one piece was shocking to say the least (if you are familiar with the Goodwill Outlets, you may find a bag of bricks, and a baby stroller, on top of a record).

I immediately noticed the 33rpm recording showed a handwritten notation of "Colorado Mountain Boys" on the torn label. Wait. What? Like the same group which included a 20-something year-old Chet Atkins? Could this be one of his earliest-known recordings? I first thought the date on the label read "January 1949," but upon Internet searching, I'm thinking this is actually noted as 1947 (keep reading).

Back up a bit - The record is in very poor condition. Being an acetate, the metal was exposed, it's scratched (an understatement), and there appears to be some glue, or some kind of residue on the surface. I tried cleaning with soap and water, and even attempted to put Goo-Gone on the "glue," Nothing budged.

I took a chance, and put it on my portable player, thinking I wasn't going to tear up my expensive stereo needle, if this record didn't even play. In between the skips and scratches, a cover of Ernest Tubb's "I'll Get Along Someday" came blaring through the tiny speaker.

Told ya. But did you hear that guitar? If I were a betting person, it sure sounds like Chet Atkins. From what I could find, Chet had relocated to Denver, in 1946, after being fired by KWTO radio in Missouri for "not sounding country enough."

Listen to another sample on this disc - a "rocker" instrumental, which seems to reaffirm KWTO's reasoning behind firing Atkins.

According to Chet’s autobiography Me and My Guitars: “Zed Tennis had been fired from KWTO at the same time I was, so the two of us went out to Denver, and became members of Shorty’s (Thompson) western swing band called Saddle Rockin’ Rhythm. He was one of the popular acts performing on radio station KOA” (Side note: According to more Internet sleuthing, Chet's brother, Jim Atkins, managed KOA, at that time).

So, is this a KOA Denver recording I have? The dates seem to keep lining up.

Steve Sholes, the head of country music at RCA, tracked down Atkins in Denver, and immediately flew him to Chicago, to record. According to the Atkins book,  "We recorded in Chicago on August 11, 1947. I recorded a total of eight songs, and sang on five of them, RCA released the records under the name Chet Atkins and the Colorado Mountain Boys.” During these recording sessions, the other members of the Colorado Mountain Boys included George Warren Barnes, guitar, Charles Hurta, fiddle, Angus P. Klein, accordion, Harold Siegel, bass. Another recording session indicates James Atkins appears on guitar, along with C. R. Crean, bass, Buck Lambert, fiddle, Joe Biviano, piano.

According to Chet’s book, after the recording sessions, he returned to Denver and his gig with Shorty Thompson, only to find out he had been replaced with another picker, Speedy Haworth. So RCA suggested he move to New York, and continue his work with the label… and the rest is history.

So, that's why I'm thinking this discovered acetate I found is actually noted as "1947" instead of "1949." Also, a 1948 Billboard story confirms that Chet and the Colorado Mountain Boys moved from Denver to Knoxville, to be the regular radio act on WNOX, and he was also entrenched with Mother Maybelle and the Carter Sisters, in 1949.

So, dear reader, if anyone has any information on this find, please drop me a line. Please feel free to share this post. Let's solve the mystery!
Posted by Lisa Wheeler at 9:03 AM