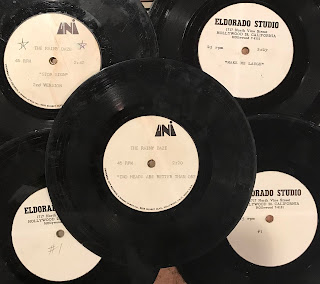 I'm still amazed that I have boxes, which still haven't been unpacked from the 2015 move back home. It's like a Christmas surprise, with each discovery. Take for instance these Rainy Daze test pressings.

I first obtained these, shortly before I moved back to Colorado, from my dear Pueblo friend, and former co-owner of the (now gone) Record Reunion, Joel Scherzer. Joel has been a huge supporter of this blog, and was damn-near solely responsible for keeping me in obscure Colorado records, when I lived in Austin.

A few of these five, double-sided, 7" 45s are marked "Eldorado Studio" out of Hollywood, CA. A few indicate the Uni label, while others are only marked by numbers. Four of the ten sides are marked "Rainy Daze." 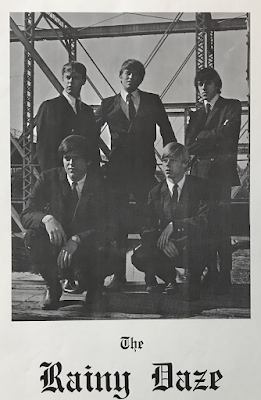 You can do a Google search and find quite a bit on the Rainy Daze, so I won't copy and paste it here. The short version is, the band formed in Denver,  in 1965, and included singer/guitarist Tim Gilbert and his brother Kip on drums, plus lead guitarist Mac Ferris, bassist Sam Fuller, and keyboardist Bob Heckendorf. The group released an album, That Acapulco Gold, and the title song made it to #70 on the Billboard Hot 100, in 1967... but was pulled, due to the marijuana reference. The band broke up, shortly after that,  but Gilbert put out one more song as The Rainy Daze, on the White Whale label - the 1968 recording of "Make Me Laugh," which was recorded with session musicians.

This little tidbit helps solve the mystery of the age of these, as one of the test pressings is for "Make Me Laugh." 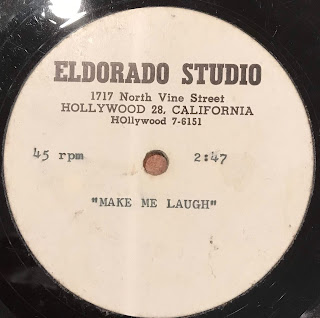 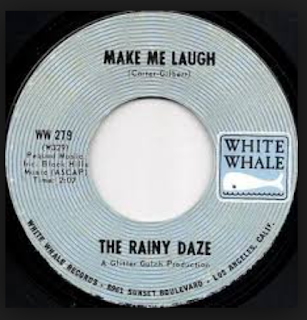 Among the stash is a test pressing of two versions of "Stop Sign." Both are marked 2:42, which was the running time of the official release. Listening to both, they sound exactly the same. 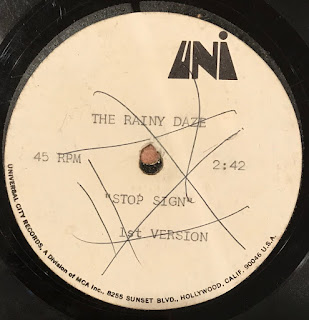 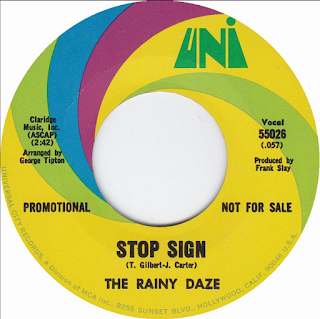 Also included is a test pressing of "Blood of Oblivion," which was included on the group's debut LP. The pressing shows a running time of 2:23, while the official release clocks in at 2:40. 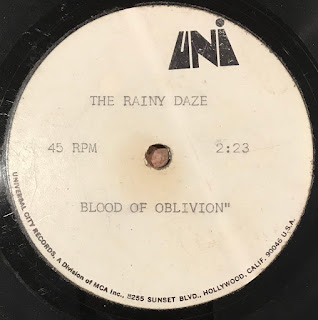 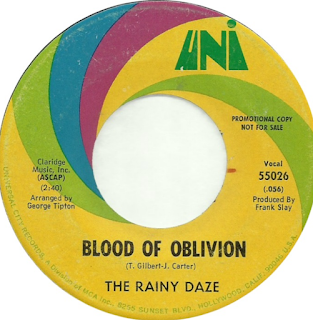 While "Stop Sign" was the official flipside of "Blood of Oblivion," the test pressing shows "Two Heads are Better Than One," which appears to have never been released. 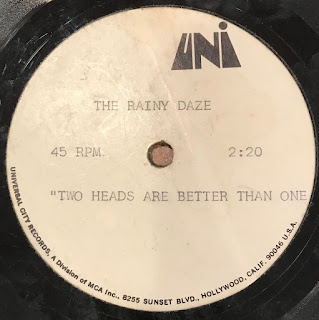 Rounding out the find are two discs, marked only "#1" and "#2." Both songs are instrumentals. I thought they might simply be the instrumental backing of a song, but neither one seem to match up with any of the cuts on Acapulco Gold.

As always, dear reader, if anyone has a clue on these, drop me a line...