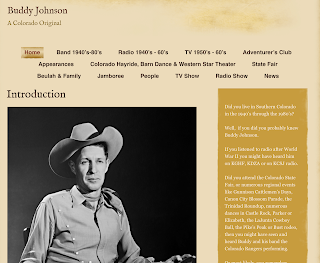 I was doing some digging on the Internet, when I stumbled upon this incredible (understatement) new website, dedicated to Buddy Johnson. This obvious labor of love is a fantastic resource, filled with amazing pictures, stories, and memorabilia, and is maintained by Buddy's son, John.


Probably one of the most-often Colorado music-related questions I get is, "Do you have any information about Buddy Johnson?" The affection Pueblo folks have for this man has never waned, long after he passed away in 1986. Several years ago, I featured some Buddy Johnson recordings, in a Jimmy Cox blog post.

Buddy was a huge fixture on local Pueblo radio and TV, as well as the state fair, and other annual events - both as a solo performer, and with his band, the Colorado Rangers. It's estimated he had more than 100,000 children appear on his children's show, which ran on KCSJ (now KOAA), in the 1950s-60s.

Buddy's son is also working on a book about his father, Buddy Johnson - A Colorado Original, which is expected to be published next year, in honor of what would have been his father's centennial birthday, May 7, 2019.