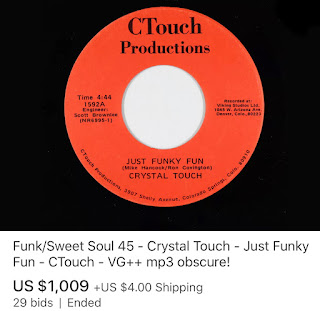 In all of my years of collecting state-made vinyl, this is now one of, if not the highest price ever paid for a Colorado-made record.

No, I was not the high bidder.

I actually had the opportunity to buy this record (YouTube), several years ago, for a whopping $50. I passed. A decision I have forever regretted, especially since I've dropped more than that on other Colorado vinyl finds. 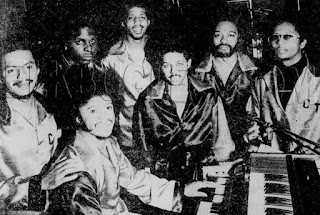 Formed in 1974, Crystal Touch was a local seven-member disco/funk group, who were regulars at Bell's Nightengale, on E. Las Vegas, south of downtown. In 1975, Crystal Touch was the headliner at the Un-Concert, held at the City Auditorium. The concert also featured Maxine (no last name,  but the picture below sure looks like Maxine Watta), The Wumbleys, described as a "five piece rock outfit," and the Palmer High School Stage Band.  Jerimi Haes acted as the concert's emcee. 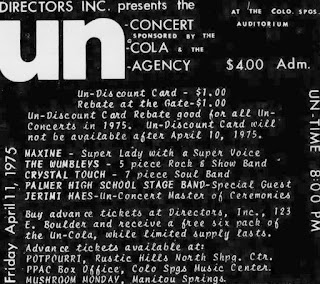 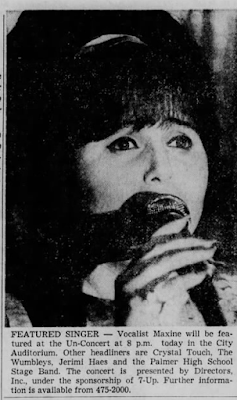 According to a 1976 story, in the Colorado Springs Gazette Telegraph, the group's one and only record was being sold at their Bell's shows. It was expected to be for sale, at local record shops, in the coming weeks. It was recorded at Viking Studios, in Denver, and pressed at Nashville Recording Productions (NR 6995) 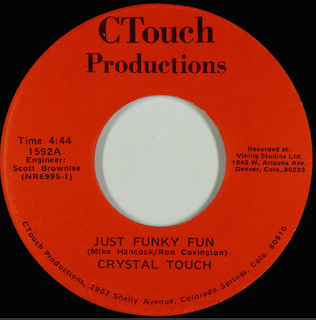