Second Place is Better Than No Place 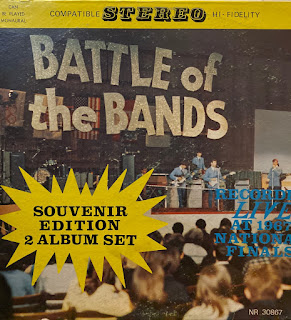 My Tennessee-based radio and record buddy Paul Glavin, alerted me to an eBay auction a few weeks ago - a 1967 battle of the bands LP with a Colorado group, the Action Brass, competing. I knew about the record, but also knew that it had previously booked for $500, so it was way out of my price range.

Flash forward a week, and the high bidder didn't pay. The seller asked if I still wanted it, for $9.99.

So, enough about the "second place" backstory (it actually fits in well with the rest of the tale, below).

In 1967, 11,000 local bands, across 30 states, competed for a chance to appear in the national finals of the Weymouth, Massachusetts Jaycees Battle of the Bands contest. It was the fifth year of the event, and the winner was given the title, plus $2,000 cash, a Volkswagen bus, a wardrobe, a camera, and "guidance" from the Jaycees to pursue their musical careers. According to the LP liner notes, this included "information on recordings, bookings, radio and TV promotion, and all other areas relative to the music business."

After a two night competition, the Action Brass picked up the first place prize, and represented the state in the national contest.

On August 17-19, 1967, a total of 16 finalists competed at the Ridge Arena, in Braintree, MA., for the grand prize. Joining the Action Brass were The Elegants (Maine), Diane and the Jades (Pennsylvania), The Disciples (Idaho), The Flares (North Carolina), The Gents (Utah) The Immortals (Florida), The Loved Ones (Connecticut), Mike and the Marvels (Delaware), Missing Links (Ohio),  Roots of Evil (Arkansas), The Sheffields (Massachusetts), The Soul Division (Alabama), The Tombstones (South Carolina),  Tony's Tygers (Wisconsin), and The Untouchable Men (Mississippi).

When all was said and done, the winner was The Gents, out of Utah. They dubbed their music "culture rock," with a set that included Beethoven's "Moonlight Sonata."

Second place (you guessed it) went to the Action Brass. Their prize was $1,000 and a wardrobe. 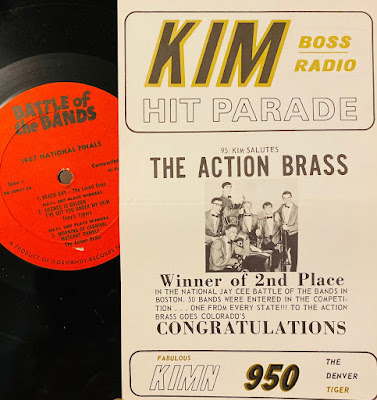 Battle of the Bands LP and the August 26, 1967 KIMN Top 50 chart, congratulating the Action Brass for its second place finish

According to the liner notes, the Action Brass "... a great group with a refreshing clean sound, halfway between rock and the Tijuana Brass."

Life Magazine and Billboard showed up to cover the event. 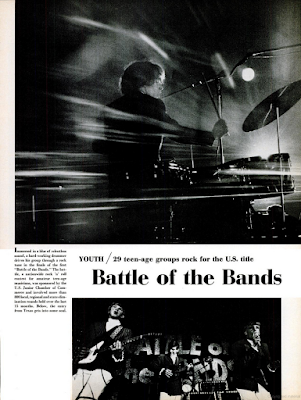 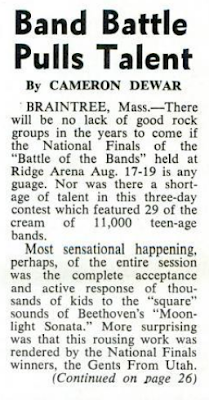 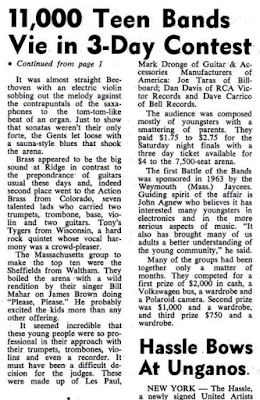 The following year, the Action Brass released a one and only single, "When The Spirit Moves Me" / "Livin' The Good Life," (Cartay 5335). 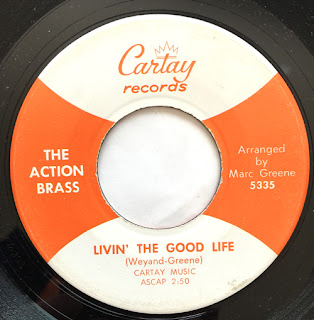 Listen to "Livin' The Good Life"

As for the Gents? They released a cool garage fuzz punk single on the Normandy label, "I Wonder Why," (the b-side was "Moonlight Sonata") and then shortly after disbanded.