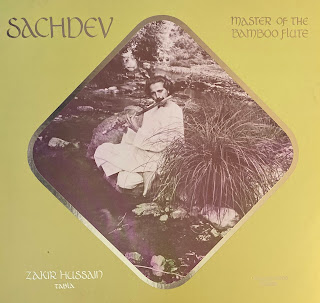 I've always enjoyed the sounds of a sitar, tabla, tambura, and bansuri. I played Ravi Shankar LPs so much that I had to replace them, repeatedly.

I read last year that one of my favorite performers, G.S. Sachdev had passed away (June 24, 2018). His beautiful ragas, on bansuri (bamboo flute), were transcendent.

In 1975, Sachdev performed at Naropa Institute, in Boulder. He was accompanied by tabla virtuoso Zakir Hussain, for a performance of the Raga Bhupali. Naropa had only been open a year, but was already achieving notoriety for its world renowned campus performers.

While the Raga Bhupali is considered a classical piece of Hindu music, it's an often-heard piece in many Bollywood movies.

Four years after the concert, the Sachdev-Hussain event was released on the Unity Records label (pictured above). I was lucky enough to find this release, at the Denver Record Convention, last week. 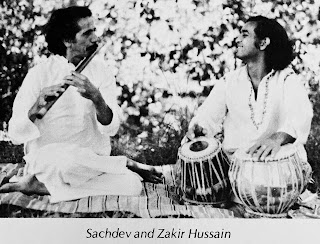