So I'm going through some 1955 Country Song Roundup issues, when I come across a fan club directory. Looking at all of the club addresses for everyone from Roy Acuff to Faron Young, I spot a fan club for a singer named Sunshine Ruby. The fan club was based in Pueblo!

Now I will be the first to tell you, I was not familiar with Sunshine Ruby. A quick Internet search finds that Ruby (born October 19, 1939 in Myrtle Springs, Texas; actually Ruby Jewell Bateman) was a teen singer, mostly on the Texas country music scene.

The founder of the Sunshine Ruby fan club, was one Blanche Trinajstick, of Pueblo. Blanche apparently worked behind the scenes, trying to keep Sunshine Ruby's fans in the loop, mailing out newsletters, along with photos of the singer, but apparently it didn't last long. In 1953, Ruby released a few RCA Victor label records, highlighting her 14-year-old voice. By late 1955, Ruby retired from show business.

So I'm doing some more digging, and I find the name Blanche Trinajstick again, as the president of another little-known teen country singer, Peggy Upton. Peggy recorded for both the Starday and Rose labels, before also fading off into the country music sunset. Blanche showed up again, as the president of another short-term act, Bailing Wire Bob, a country music singer and disc jockey, from Louisiana.

While these literally-unknown country singers piqued my interest, the fact that a Pueblo woman handled their fan clubs, was far more interesting.

According to a mini-biography of her, in a book entitled The Selling Sound: The Rise of the Country Music Industry (Diane Pecknold), Blanche (or Trina as she known) was originally from Texas. Born in 1923, she and her husband, Frank, moved to Colorado, after World War II. She admitted that she missed the appreciation of country music that she felt in Texas, and started her early fan clubs, to combat her feelings of being out of the loop, in Colorado. "The people in Colorado looked down their noses at you, if you mentioned country music."

Little did I know, Blanche was considered the queen of fan clubs - all from her Baltimore Avenue home.  In 1960, she started the K-T Country Roundup - a fanzine dedicated to country music fan clubs and news. 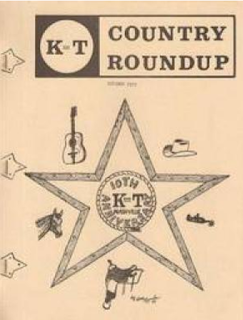 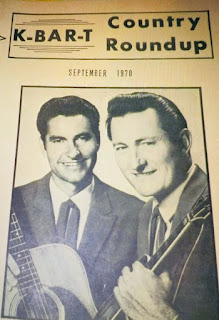 In 1977, she founded the National Association of Fan Clubs - the first organization to coordinate every fan group, dedicated to a particular celebrity.

According to a 1985 story, in the Orlando Sentinel, her fan club directory (which later expanded to include TV and movie stars, as well as music celebrities from ever genre), listed 625 active fan clubs.  By 1997, the annual publication grew to 75-pages in length, contained 1,500 groups, and listed (alphabetically) every fan club that elected to become a member of the NAFC, giving readers the U.S. mail address of the current president.

To my amazement, Blanche was quoted in several national newspapers, as the source for all things fan club related -  In 1990, the Tulsa World called her "The Grande Dame of Fan Clubs," in an article about her tireless efforts. The Washington Post, also in 1990, wrote an entire feature on the Pueblo housewife, and her fan club group. The story included how to start your own fan club, and how to contact Blanche, in Pueblo, complete with her home phone number (!!)

Blanche passed away in 1997. She's buried in the Imperial Memorial Gardens, Pueblo. After her passing, the National Association of Fan Clubs was organized out of California. It ceased operation, in 2002.