Played in Pueblo: Chuck Bricker and the Harlequins 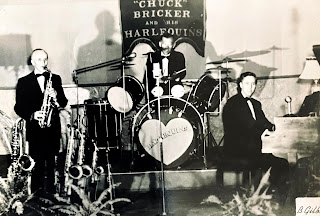 Hey all! Added this real photo postcard to my stash, after discovering it on the big online auction site. The front shows Chuck Bricker and the Harlequins. The back says "Moose Ballroom Pueblo Colorado 1953."

While this postcard looks much older than 1953, the Kodak stamp box on the back (which was first used in 1950), confirms the time period.

I rarely spotlight a group not from Colorado, but this one felt like it needed a mention, since the band apparently played in the Steel City, but the group's actual history is sparse.

Not a lot to go on with this group. I found some references to Chuck and the boys, twenty years earlier, in a 1933 South Bend IN newspaper, and again playing at the University of Michigan, that same year.

"Frosh Frolic Band "Chuck" Bricker and his Harlequins, the new orchestra engaged for the Frosh Frolic Friday night in the Union ballroom, have made progress toward national recognition in an unbelievably short time. Organized less than a year ago, they have won favor on the Pacific coast and at a number of Big Ten universities, have broadcast over several radio stations, and are soon to go on the air for their first national broadcast. The Harlequins made their experimental debut on the San Francisco peninsula in the late spring of 1932. After spending several months on the coast, including an engagement at Leland Stanford University, they came to the Middle West, where they have since been playing. Purdue, Indiana, Chicago, and Valparaiso have danced to their music, while they have appeared twice at the University of Illinois. They are well-known in Chicago, having played at the Town Club, Amalfi Gardens, the Garden of Allah and several theatres there. The Stanford Daily said the following in a review of the Harlequins' music: 'Here we have an orchestra that makes you happy and makes you feel like dancing-an orchestra that has rhythm and variation, and, best of all, what it plays is music. Something else you'll like is Bricker's weakness for medleys of old and new tunes. This orchestra even manages to play the St. Louis Blues in a way that is different.' "

Anyone attend this show, or have any additional information? Contact me.