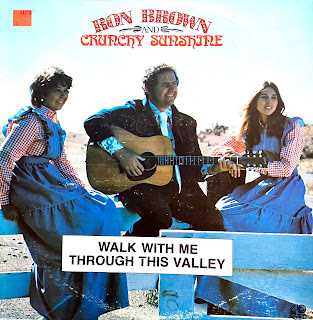 Was playing around the far northeast end of the state, and stumbled across this Rocky Ford faith-based country album, Ron Brown and Crunchy Sunshine - Walk With Me Through This Valley, 200 miles away, in Sterling.

You never know where Colorado vinyl is going to land.

Some of the earliest press I could find on the trio was a July, 1974 blurb in the Lead Daily Call (Lead, SD), describing Crunchy Sunshine as "the nation's fastest growing country rock group." At the time, the members were noted as Ron Brown, "Nancy and Connie." 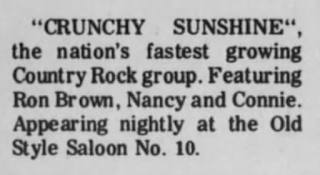 Then, a few months later, Connie left the group. I found this ad in the Colorado Springs paper, apparently placed by Brown, looking for a replacement singer.

Joan Koester was soon added to the line-up with Brown and Nancy Youngquist.

According to additional press, the name Crunchy Sunshine came from "the feeling the group gets when they play."

With the group back to three members, Crunchy Sunshine continued playing country rock, in hotels and bars, in Colorado, Nebraska, and the Dakotas. 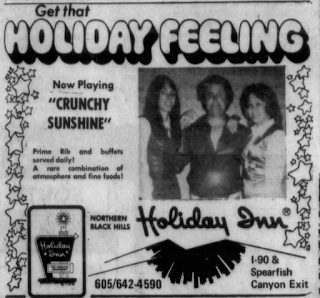 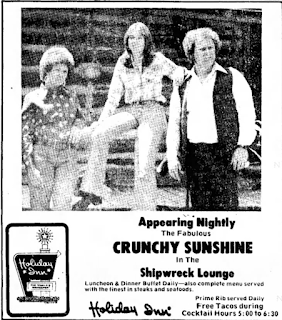 Then in 1975, on Thanksgiving night, Ron received a spiritual message to play only gospel music. He ignored the sign, until he received another one, the following month. While playing at a club, former Happy Goodman and Blackwood Brothers guitarist Dwayne Friend came in, looking for souls to save, and found Crunchy Sunshine on stage.  He convinced them to come to his revival, where they converted, and quickly went on tour as a gospel act.

Walk With Me Through This Valley was recorded in Kentucky, at Goodman Sound, with the help of backing musicians Gary Dee on steel, and John Minick on piano. It was released on the Goodman's Big G Custom label. It features covers of religious standards, along with several original country-gospel songs, written by Brown.

Listen to "Secure Your Future"

I couldn't find any other information on the group, past 1976. The group based themselves out of Rocky Ford. Ron Brown operated Sunshine Music Studio there (913 Railroad Avenue, near Benito's Bar).

Of course, if anyone has an additional information, let me know.