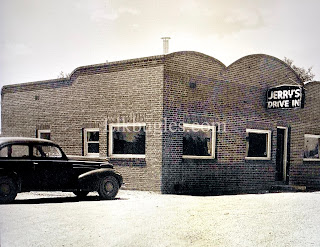 One of the earliest photos of Jerry's Drive In

Hey all! Very excited to share this cache of original photos from Jerry's Drive In, one of the well-known hangouts, in the 1960s, for local Pueblo music. This amazing collection is courtesy of Gary Giarratano, the son of John Angelo “Jerry” Giarratano, and Angelo Giarratano, the son of Settimo "Cecil" Giarratano. Brothers Jerry and Cecil were the long-time co-owners of Jerry's.

Jerry Giarratano was a lifetime resident of Pueblo. After he graduated from Centennial High School (1942), he joined the U.S. Army. He served during the Normandy Invasion of World War II as a Sergeant in HQ 3, 502nd Parachute Infantry Regiment, 101st Airborne Division (he was the recipient of the Purple Heart, and the Bronze Star for bravery). When he returned from service, in 1946, he and his brother Cecil opened Jerry's Drive In, later renamed Jerry's Lounge / Keg Room.

Jerry's Keg Room, located at 614 W. 4th,  often featured the royalty of Pueblo teen bands -  The Stingreys, Chandells, Teardrops, and the Trolls, but it didn't start off as a music venue.

"It was a drive-in restaurant." said Gary Giarratano, Jerry's son. "You would drive up and park, and we had car hops, who would bring out your order... but they weren't on roller skates." 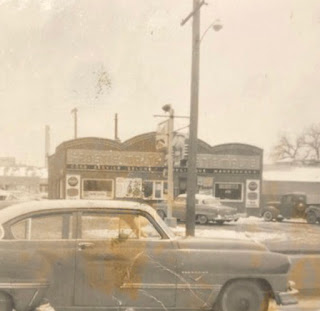 During high school, Jerry Giarratano worked at Patti's, on south Santa Fe. "He grew up on Mechanic Street, so he would walk a block to work," said Gary. "He knew he wanted to get into the restaurant business, when he worked there."

Jerry convinced his brother, Cecil, to leave his job at CF&I to help run the new venture, named Jerry's Drive In. 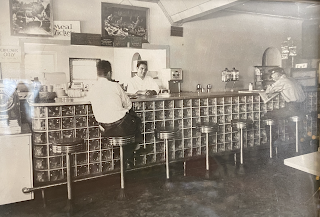 "It was originally supposed to be called Gerry's Drive In, which was short for Giarratano," said Angelo Giarratano, Cecil's son. "But they decided to use the J. My mother floated them a loan for $1,500. The brothers built that building. My dad laid every brick." 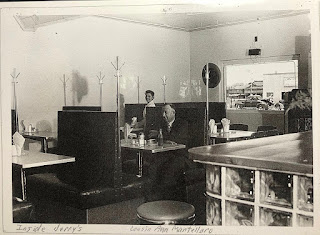 "I was a little boy. My dad would bring me there in the summertime, and I would hang out and sort pop bottles. I was still in grade school. The older I got, I would take on more responsibility, but I could still have fun, like play pinball all day long," said Gary.

In 1963, Jerry and Cecil decided to expand the restaurant.

"He couldn't compete with the A&W and the McDonalds," said Gary. "They started off with making the back of the building a patio, with picnic tables, then they put a roof over it, and added a fireplace, to make it feel like a ski resort. Then they added the bandstand, and closed it off."

The new addition was christened The Keg Room.

"I named the room," said Gary. "I was just a kid, and I said, 'Why don't you call it the keg room?' and they liked it.
Around that same time, the popular Denver band, the Astronauts held an outdoor show, across the street from Jerry's.
"I remember going to that concert,"said Gary. "It was in the parking lot, at the Crown Discount. I was about 12. I was really little, and one of our employees, Charlie Dickerson, put me on his shoulders so I could see."
Seeing the crowds, and the enthusiastic response, Jerry and Cecil soon took a cue from the Astronauts performance, and turned the back room into a live music venue.
"The Stingreys were the first band I remember playing there," said Gary. "The Teardrops and Chandells were there, too. My dad loved all the bands, but the Teardrops were probably his favorite. He was really close with Angelo Rotondo [the Teardrops drummer], and Rick Witcowich [band keyboardist] lived a few blocks from us." 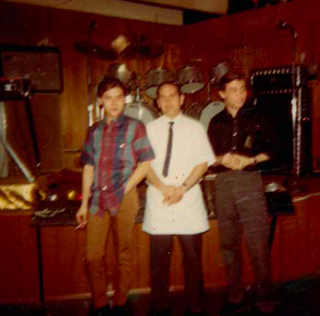 Rick Witcowich (the Teardrops), Jerry Giarratano, and Ange Rotondo (the Teardrops)
Soon, Jerry's would rival the Hi-Fi Club and other local bars, which also started adding live music.
"The East, Centennial, and County High kids would come to Jerry's," said Angelo. "The South and Central High kids went to the Hi-Fi." 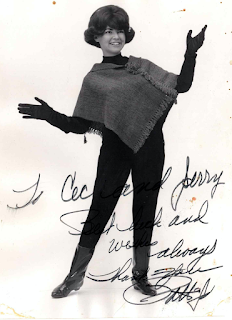 Patti Jo Martinez signed photo to Cecil and Jerry
"I loved playing with the Teardrops, at Jerry's," said Patti Jo Martinez, the one-time lead singer for the group. "We were all like a musical family, having the time of our lives. Every time I pass that building now, I mention to my husband Bobby [Miranda] how fun it was."
"We were the house band there, for a spell," said Trolls drummer Phil Head. "We were all like family. Jerry and Cecil took me deer hunting, one year." 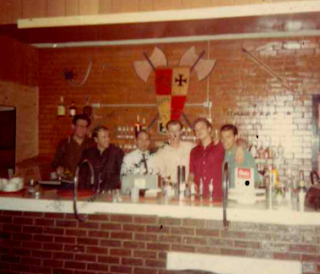 "We had a 188 capacity in the building," said Gary. "There was a sign on the wall... and we probably would have 300, or more, people in there. Once in a while the fire department would come in and tell us we had to kick people out."
"The oldtimers didn't like the music. It was too loud," he added.
"We really didn't have any famous groups perform," said Angelo. "Although the Dave Clark Five was passing through town, and had lunch here."
While the music stayed in the back, food was being served in the front. Patrons enjoyed Jerry's signature sausage sandwiches and 1/3 pound hamburgers, being fresh ground daily.
With the increase in customers and music lovers, parking became an issue.
"My dad never had enough parking, so people would park at the at the nearby Mars gas station, which would close at 8:00 every night," said Gary. "So he talked to the manager at the Arapaho Grocery store, which was across the street. They agreed to let him use the parking lot, as long as we cleaned it up, every night, and we paid for any damage done by our patrons. Sure enough we end up paying for the replacement of two windows at the store...and I was always the one picking up the beer bottles in the parking lot, every night."
While the beer would flow at Jerry's, in and outside the building, he knew that more money could be made with a liquor license.
"The golf course was putting in a new bar. The old club house had a liquor license, held by Mo Springer, the golf pro out there," Gary said. "Mo got another license for the new club, but still held on to the old one, which was still valid, so he sold that liquor license to my dad. Soon we were packing the place, with cocktail drinkers. I wasn't even of age, and it was my job to check IDs at the door."
The liquor license also had a role to play with at least one Pueblo band (briefly) changing its name.
When the Teardrops broke up, Ange Rotondo wanted to keep using the name, but I don't remember why he couldn't," said Gary. "Anyway, the band liked to drink Wild Turkey, so he decided to call his group the Wild Turkeys. The bands at Jerry's always had a great deal - we paid them, and they got to drink, for free."
Gary said, at one point, Jerry's sold so much Wild Turkey that the company presented his father with a commemorative platter for the achievement.
"I still have that platter," Gary said.
"Jerry's also went through more kegs of Coors beer than Tilagi's in Boulder. That's all we ever had on tap. My dad was a big Coors guy." 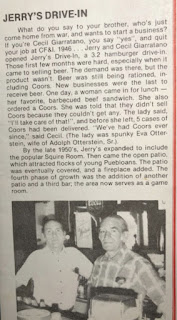 Coors Suds 'n Stems newsletter on Jerry's beer accomplishment (click to enlarge)
Side note: Before Gary Gray bought the across-the-street Coors Tavern, he was one of Jerry's original bartenders.

During the Vietnam era, Jerry's saw an increase in soldiers stationed at Fort Carson.  "They would come down to Pueblo, because we treated them better than they were in the Springs," said Gary.

As is usually the case with adult beverages flowing - there were plenty of fights at Jerry's.

"There were fights there all the time," said Gary.  "We had bouncers, but the guys who sat at the front bar would also come in and help, if we needed extra bodies to break up a fight."

Gary said Jerry's had a coordinated system, whenever a fight broke out.

"We had this lighting system, and when a fight would break out in the back room, we would flip this switch, and the breaker would shut down the band on the stage. So if we only heard the drummer playing, we knew there was trouble," said Angelo.

"That meant the guys up front had to come to the back, to help break up the fight" said Gary. "The barmaids would run behind the bar to secure the cash register."

"Don Bussey's [formerly of the local band, The Cobras] wife Marcia once walked in before we were about to play [with the Trolls] and called me a two-timer and pulled out a pistol, and shot me with blanks," said Phil Head. "It was actually a bad joke, but I don't know who it scared the most, me or the college kids who sat near the stage." 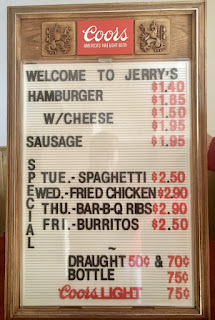 Original Jerry's menu board (circa 1970s)

Business was so good at Jerry's that in 1970, Jerry and Cecil decided they needed another patio. "They wanted to expand the right side of the building, to make the patio," said Gary. "But when they were excavating, and putting the floor in, they dug up a skull and bones."

They immediately called the police, who investigated, and sent the bones to Colorado State University.

"They found out that the bones were more than 75 years old, and there were both adult and and children's bones.  The police couldn't figure out who it was. It was a guess that they were probably a result of the 1921 Pueblo flood, since back then, the river ran right behind Jerry's." 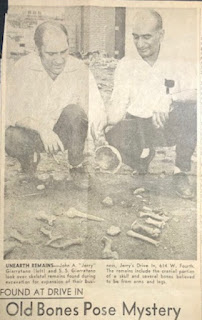 "It made the news, and we ended up calling it Jerry's Graveyard Patio."

Bones weren't the only thing found at Jerry's.

"I was the janitor too." said Gary. "I had to clean up afterward, and I would often find tons of money on the floor. One time I found a ring on the floor, an engagement ring. My family said we should put in in the safe, in case somebody came back for it. It stayed in that safe for ten years. When I got married, my dad offered me that ring. It was my wife's first wedding ring. Finally on my 20th anniversary, I bought her another ring." 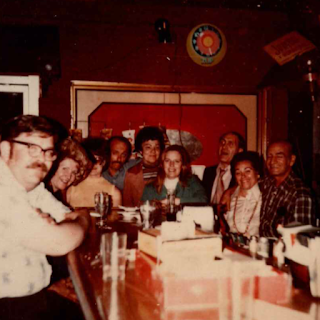 Just another fun evening, at Jerry's

Angelo graduated from East High in 1965, while Gary graduated from Central, in 1970. By 1975, Gary had graduated college, with a degree in biology. Angelo had left the business earlier, to attend medical school (he is a how-retired podiatric surgeon). Neither had an interest in working at the family business.

"Being the oldest, I was supposed to take it over," said Angelo. "I became a doctor. My brother was the second oldest, and he got a job at Coors, and moved to Denver. And Gary went on to be a medical rep."

"None of us wanted to continue at the bar. Actually they encouraged us to go to college," said Gary.

"Times were changing. Then the GIs stopped coming, and so did the college students. It was getting hard to pay bands," said Gary. "We would charge the door $1, just so we could pay the band."

The club remained open until 1980, when Jerry took a job as a field appraiser for the Pueblo County Assessor's office, and later retired in 1991.

In 1980 Jerry and Cecil leased the building to Ottie Otterstein who two years later gave it back to the brothers. They held on to the building for ten more years. The building is now a long-time pawn shop. 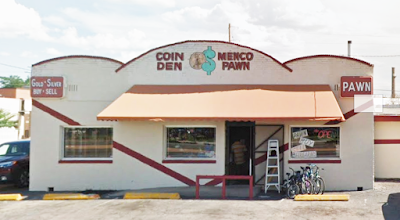