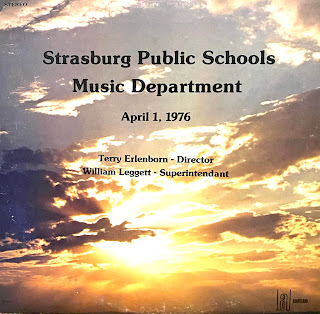 One of my guilty pleasure Colorado music genres is school records. There is something incredibly endearing about amateur teen vocals on pop songs. Take for instance this cover of the 1970 Neil Young-penned (later a hit by Prelude, in 1974) "After the Gold Rush."

Listen to "After the Gold Rush"

This song cover is courtesy of the high school chorus, in the tiny town of Strasburg, Colorado.

Located about 40 miles east of downtown Denver, Strasburg is home to about 2,500 people, the Comanche Crossing Museum, and the annual Hometown Days.

One has to wonder what the story was behind high schoolers covering a song about a medieval celebration, getting high, and then traveling with "the chosen ones" in a spaceship.

"You know, I really don't remember why we picked that song," said Terry Erlenborn, the then-music director at Strasburg. "I think the record was in our library, and the kids had a lot of say in what we would use for the album."

Erlenborn, who served as the music director from 1974-1990 said that the idea for the album came from his years teaching in Illinois. "Schools there started making records, as a souvenir for the kids, so I thought it would be a nice idea if we did that here, in Strasburg."

The album was recorded on April 1, 1976 and released on the prolific Audicom label.

Side one contains all instrumentals, credited to the Beginning Band, the Sixth Grade Band, and the Seventh Grade Band. Side two is courtesy of the High School Chorus and High School Band. The selections include standard school band songs ("The King and I Medley"), as well as faith based songs ("Amazing Grace"),  plus other pop covers ("Sound of Silence," and a "Three Dog Night Medley").

"We recorded it right there in the band room," he said. "We had a new band room, in the new addition at the school, and I remember that they set up microphones in the room, and we recorded it all there."

He estimates less than 100 were printed. It would be the only recording made by the school.

Erlenborn later moved to Elizabeth, and then retired back in Strasburg, where he started a video recording business.

"I remember when I was a student, and in band, and I loved it. I always wanted to be the band director, so I was able to do what I love. Not many people can say that."

Email ThisBlogThis!Share to TwitterShare to FacebookShare to Pinterest
Labels: Strasburg