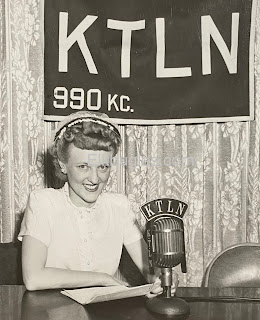 I'm so fortunate to have rescued these photos, a while back. The story of "Katey Ellen" (also spelled "Kaytee Ellen") is one of those Denver media stories, which was well ahead of its time - can a radio personality continue to use an air name, which sounds like the radio station call letters, after she is fired from said station?

Unfortunately these photos have no identifying writing, on the back. Hoping someone can definitively identify these ladies. Could one of them be "Katey Ellen," Irva Steffen? 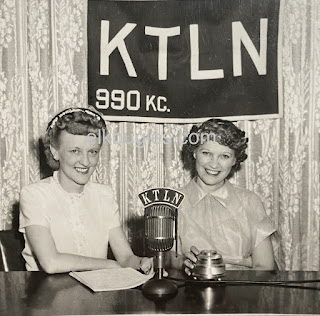 Irva Steffen was considered one of the most popular radio personalities in Denver, during that time. She went by the catchy name "Katey Ellen," a play on the station call letters. In 1954 the station fired Steffen, for undisclosed reasons, and hired her replacement, Shirley Wray. The new hire took over Steffen's shows, and even her radio name, Kaytee Ellen.  The change didn't sit well with Steffen, who claimed that she came up with the air name and should have full rights to use it. The station claimed that the name was an obvious phonetic play on the station call letters, and they should retain all rights.

Steffen filed suit, and in May, 1957 the case went to court. After several weeks, a judge ruled that the former station personality could keep her professional name, in spite of its phonetic similarity to the station's call letters, because "ratings showed that her personality gave the program drawing power, not the call letters."  She was awarded a $13,300 judgment, including $2,500 punitive damages, for what the judge described as "wanton and reckless disregard of plaintiff's rights and feelings."

Several decades later, the great-granddaughter of Steffen, Anika Pyle, would go on to have a band named Katie Ellen.

If anyone can offer positive proof that one of the ladies in the picture is the original Kaytee Ellen, Irva Steffen (or is it Shirley Wray), please let me know.