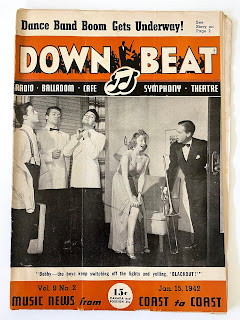 So I'm going through this massive stack of 1940s-era Down Beat music magazines, when I spot this story in a 1942 issue. It mentioned well-known Denver entertainer Pete Smythe and his long-time association with the old Cosmopolitan Hotel (formerly located at 1760 Broadway - demolished in 1984), Apparently ol' Pete had a run-in with the union contract waiters at the hotel, when he crossed the picket line. It inspired him to write a song about it, "I've Been Robbed." Apparently the argument didn't last long, as he then released a follow-up song, "I've Had a Change of Heart." 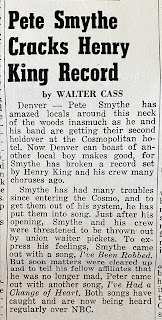 The story indicates that both songs are being played on NBC radio, but I have never been able to find an actual copy of a record. I'm wondering if the writer meant that the songs were being heard on KMYR radio, where Smythe was first a disc jockey (and had a regular show called "Meet The Boys in the Band"), before his long-time association with KOA radio and "The Pete Smythe General Store."

The story headline mentions big band pianist Henry King (1906-1974), who apparently had a long stretch at the Cosmo. King claimed to have recorded over 5,000 remote broadcasts for numerous networks during the group’s traveling career. The band's theme song was "A Blues Serenade."

If anyone happens to know of an actual (record) copy of "I've Been Robbed" or "I've Had a Change of Heart," I would love to hear it!