Rock the Boat with the Gentry Brothers

Anyone who grew up in Sterling, during the 1960s-1970s knew the Gentry family, Rex and Phyllis, and their four sons - Bruce, Keith, Royce and Wayne. Rex helped build the original part of the Calvary Baptist Church, and the family were the former owners of the Spin Out roller rink.

The Gentrys had always been active in the local church, and as the boys grew older, they started entertaining the congregation with their harmonies. According to an archived story in the Greeley Daily Tribune, the brothers performed for the first time, in 1953, at at the Cook Community Sing. 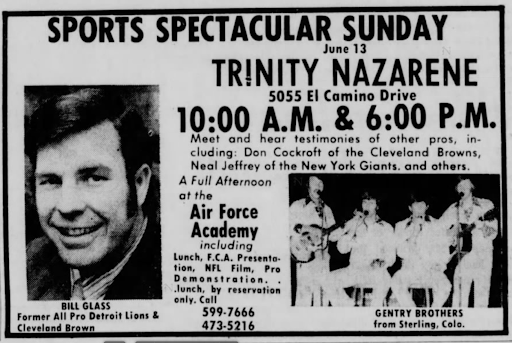 At some point, the brothers were billed as performing both gospel and rock, as noted in this ad for the 1977 Greeley Farm Show (along with other known Colorado performers, Al Fike and Jim Turner). 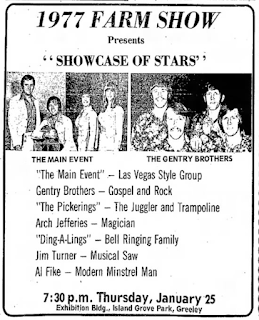 I've listened to my fair share of private-issue Colorado faith-based records. To be honest, most are hard to get all the way through, so I rarely have hope that one will surprise me.

The Gentry Brothers did, with their 1976 release of Jesus 1 The Only Way. 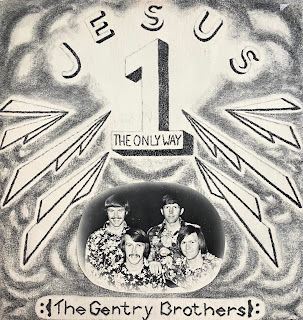 This album starts off with the stereotypical heavy-harmony, and I was thinking this is just another family gospel LP. But then it took on a moody loner folk vibe with side two, and "The Answer."

Listen to a sample of "The Answer"

But the biggest surprise was the use of the Hues Corporation 1974 hit "Rock the Boat." Changing the lyrics, but keeping the obviously immediately-recognized melody. This will teach me to listen to an album all the way through.

Sadly the vocalists are not credited individually, so I have no clue which of the brothers is handling the lead on these songs.

I couldn't find any other press on the brothers performing, past 1979. The Windsor Beacon mentioned they were going to be working on a second album, but I couldn't find anything indicating that it actually happened. In 2017, Bruce Gentry performed a solo concert for "First Friday @ First Presbyterian," in Sterling.

Whether one album was enough, or not, their debut has been discovered as a rarity, among a certain collectors. In 2014 Popsike recorded a selling price of $150 (although Discogs has it closer to $25).

Email ThisBlogThis!Share to TwitterShare to FacebookShare to Pinterest
Labels: Sterling