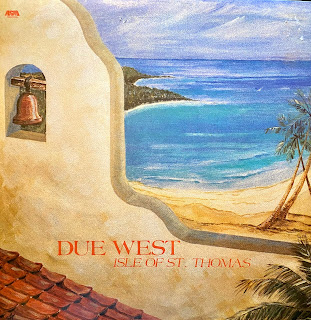 So I'm digging through a record bin, and come across a couple of 1990 Korean language (at least based on the liner notes) LPs entitled Due West Isle of St. Thomas. The album appears to have a smooth jazz Caribbean vibe, based on the cover art and song titles ("Toucan Strut," "Coconut Bay," Coral Reef Ballet"...). I was about to put it back, when I flipped over the album and noticed the record label address - Windsor, Colorado.

I obviously pick up both copies and head back to the house, to learn more.

Thank goodness for language translation apps. Although, I'm idly wondering just how accurate it is. See Korean-English translation below: 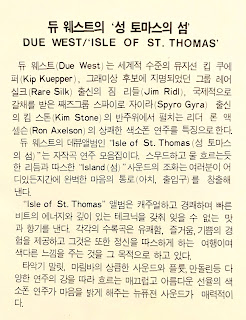 "Due West is a world-class musician Kip Kuepper, who was in the group Rare Silk, who was nominated for a Grammy, and Jim Ridi, from the jazz group Spyro Gyra. Accompaniment by Kim Stone. It is characterized by the refreshing saxophone performance of Ron Axelson. The debut album Isle of St. Thomas is a collection of homeways performances. The blend of smooth flowing rhythms and warn island sounds create a perfect heart passage for your life.  The Isle of St. Thomas album is casual, light, fast bit energy, and deep technique, giving you an unforgettable taste and aroma. Each track provides a view of cheerfulness, pleasure, joy and it is also a trip to warm the spirit and its purposed is to give a different feeling. The fresh sound of percussion and the smooth and beautiful melodic color playing along the river of various performances such as flute, mandolin, the new fusion sound that brightens the heart."

Ron Axelson was born in 1954, in Grand Junction. The liner notes mention that he moved to Nashville, before moving back to Colorado. 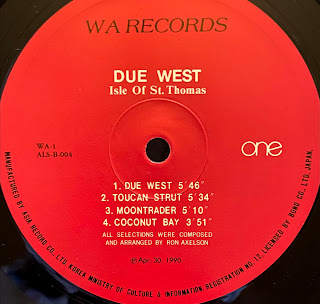 The music has a very "drinking a mai tai, under an umbrella, watching the ocean" vibe to it.

I couldn't find a domestic release of this vinyl album. It appears it was only released in Korea, as I found several links to the album, on Korean websites.

In 1995, the album was reissued on CD, and was credited to Ron Axelson, rather than Due West. In a May 1996 issue of Mobile Beat, I found a review of the Isle of St. Thomas:

"A well-produced eight-cut CD on the Ivory Moon label. Ron's music is best described as a cross between Kenny G and Jimmy Buffett. All songs are a medium tempo, with a sunny Caribbean flavor, perfect for any type of event. But there's a twist - using the untapped marketing power of mobile DJs, Ivory Moon has begun a promotional mailing of the CD to mobiles across the country."

I have messages into Ron, as well as the other players on the record. Hopefully we will soon learn more about the Korean-exclusive issue of this Colorado-made LP. Interesting, to say the least.