Freakin' Out on Love with Alpha Wave 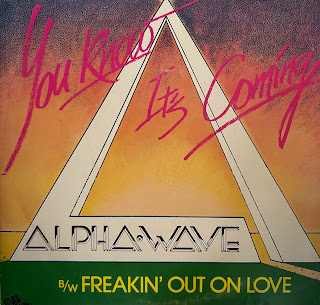 Happy Valentine's Day! I thought I would dig through the "love" songs in my stash, and feature this 1980 catchy new wave-ish / pop number by the Denver band, Alpha Wave.

The band included Henry "Broz" Rowland (also formerly of Modern Kids, The Rowland Brothers, and The Dreamers) and Fred Poindexter (later of Thunder the Radar) on vocals and guitars, and Remo Packer, on drums. The single was recorded at Colorado Sound Recording, and was the b-side to the catchy power pop "You Know It's Coming." While Rowland and Poindexter stayed in Colorado, Packer later moved to Los Angeles (later with the groups Altra, Frankie Vigilante Boogie Band, Razor Sharp, Bryon's Backbeat Groove Co., The Drunken Monkeys, City Fritter, Anomaly, and Trudeau LA).

At one point the band also included Paul Conly (formerly of 1960s innovative psych-rock band, Lothar and the Hand People).

"Yes, I was in Alpha Wave for a couple of years," Paul told me. "Broz Rowland was one of my students at the University of Colorado, Denver, College of Music. I taught music synthesis and audio recording. After he graduated, he put the group together and then asked me to join on keyboards. I did join after I left my teaching job. Broz and Fred Poindexter [AKA Eric Danger] were the principal songwriters. I wrote or co-wrote some of the songs."

Conly's time with the group only lasted a few years, when he left to compose film music.

"My final show was Halloween at Mammoth Gardens. This was probably the best show ever for the group. A full house, a costume contest, a set-decorated stage and a good sound system. Then the box office was robbed and the promoter had no money to pay us. After a string of low paying gigs, it was the final straw for me and I quit Alpha Wave. Their next gig was at the Rainbow Ballroom as local openers for some L.A. punk band. It was trendy to spit on the band from the mosh pit and I was very glad to have missed that gig."

Paul was replaced by Donny Scott. Later in the group's history, the band line-up included Myles Mangrem, and Carlton Bacon.

"I still play music with Eric Danger. We performed as recently as late summer, but I am too busy now with a jazz group, Jazz Hands, plus I am composing a score for a feature length documentary film."