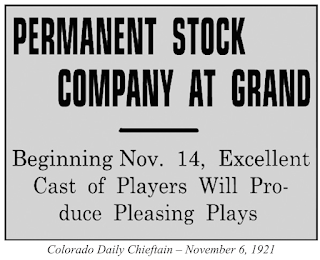 (Story is also posted in the March 2022 issue of the Pueblo County Historical Society The Pueblo Lore).

Seventeen days after the flood of June 3, 1921, the Grand Theater reopened after clearing “six and a half feet of water from the stage.” The repairs were a sign that entertainment would once again be a part of the Pueblo landscape after the horrific devastation.

On November 6, the Daily Chieftain announced that the Grand was looking for a permanent stock company—a theater group which Pueblo could call its own—to be regular performers. A few days later, it was announced that the Harrison Players, formed by Charles Harrison, would take the stage as the troupe in residence. “The Harrison Players were organized expressly for Pueblo with the purpose of giving Pueblo theater goers a high-class, permanent, dramatic company,” according to the Grand’s manager, J.D. Colegrove.

Charles Harrison was a well-known theater company player, who had formed stock player companies in Dallas, El Paso, and Kansas City. In a Chieftain story, he admitted that he was looking for a permanent home for his troupe and was happy to be setting up in Pueblo for the long term. 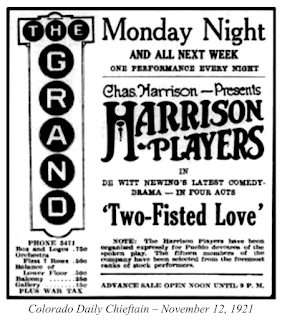 The group’s first performance, Two-Fisted Love, told the story of “a lightweight boxer (Kid Maloney) who is booked to fight a champion (Kid Burns). While he is in a small town to train, he meets the daughters of a minister, and this precipitates a battle which means more to him than the prize-ring championship.”

Between November 11, 1921, and February 26, 1922, The Harrison Players staged a total of 17 plays, each running about a week. It was reported that every show sold out of tickets and there were waiting lists for admission. The company was so beloved that when rumors began to circulate that they were leaving Pueblo, the local paper ran a story asking them to reconsider (the rumors weren’t true, as the troupe only wanted to take a few days off).

At 1:15 in the morning, with an outside temperature of 22 degrees below zero, a fire broke out in the dance hall on the fourth floor of the Grand Opera House block. By 1:30, the three-alarm blaze had brought out every piece of equipment the fire department had and every fireman they could find. According to the Pueblo Firefighters Historical Society, the fire burned its way to the scenery loft above the stage and soon the falling and flaming scenery drapes ignited the stage. By 1:50, the roof had collapsed. The red sandstone exterior blocks were three feet thick and withstood the water and the weather. The estimated monetary loss was measured in the hundreds of thousands. The Harrison Players revealed that the loss of its sets and costumes was estimated to be $20,000 (2022 equivalent = $329,000). They had no insurance.

The day after the disaster, the troupe was left wondering what would become of them. They weren’t the only ones pondering the future of the performers. The Chieftain reported that the group wanted to stay, and that “scores of comments on the streets...the people want them to stay.” The city quickly rallied around the beloved Harrison Players. To financially help, the Rialto Theater held a benefit and donated all its revenue to them. The city approved the Harrison Players use of City Auditorium for a repeat performance of Saintly Hypocrites and Honest Sinners. They then moved to the Majestic Theater, where they performed Her Husband’s Kin-Folks.

In an editorial, the paper pleaded with them to stay. “The Harrison Players in particular have won the good will of the people of Pueblo by their sincere efforts to provide clean and wholesome amusement of a high grade of artistic effort. Such a company is a valuable asset to any city, and it is the general hope that the destruction of the theater with much of the company’s equipment will not necessitate their removal from Pueblo. Anything that can be done within reason to make it possible for them to remain ought to be done. This we owe to the city if not to this painstaking and conscientious company of actors.”

By March 5, it appeared that the Harrison Players would continue to perform in Pueblo. It was announced that the troupe “voted and decided to stay.” They would use the City Auditorium, and even announced a new play was in the works, Lone Star Ranch. The good news would not last.

Just two days after announcing that they would stay in Pueblo, the troupe published a letter in the Chieftain, announcing that it could no longer stage performances due to “many obstacles.”

“To our dear friends. We had decided last Saturday to undertake to stay in Pueblo for a few more weeks, giving our performances in Memorial Hall, through the opportunity offered us by the City Commissioners. But we were swayed away from the vision of many obstacles when we made this decision by the great evidence of friendship shown us on the streets, and at our benefit. Later a more calm and mature view of the situation bringing to light troubles in the way of scenery needed, sickness of some of the players, offers received by others...”

“Never in the history of this city has a company of dramatic players given such a general satisfaction and gained such a tremendous number of loyal admirers and friends as did the Harrison Players, who appeared here in the Grand Opera House for seventeen weeks this winter. A big fire on March 1, resulting in the destruction of the theater and practically everything in it, brought to an end an engagement of one of the most enjoyed permanent theatrical attractions in the city.”

The city commissioners offered the City auditorium to the players as an inducement to remain after the fire, the newspapers devoted columns to them, the fraternal and civic organizations offered their assistance, but after thorough consideration, it was decided they could not maintain their high standard of productions in the auditorium because of insufficient scenery to work with and the oversize of the building.

Eight months later the group would return to the stage in Walsenburg. The troupe staged Cappy Ricks at the Star Theater. They would take the act on the road, performing in Rocky Ford and Ordway. 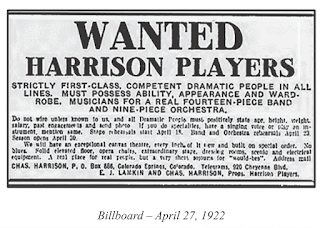