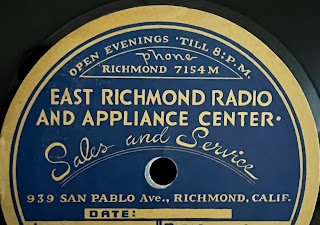 Hey all. Going to take a break from posting Colorado finds, because this discovery is pretty amazing.

So I'm digging at the big Denver thrift chain here, and found a stack of homemade-looking 78rpm recordings. I never skip looking at these, even if they aren't from Colorado, as I have found some incredible discs.

The label immediately caught my eye - East Richmond Radio and Appliance Center, Richmond, CA. These appeared to be home recording records, possibly recorded on the Packard Bell Phonocord machine (as noted on the label). 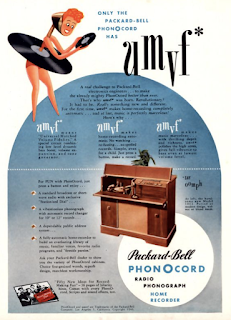 The labels note Dude Martin, who was a West Coast-based country singer and bandleader. Dude's Round Up Gang originated on KTAB radio, but moved over to KYA in 1939, where he stayed until 1950. 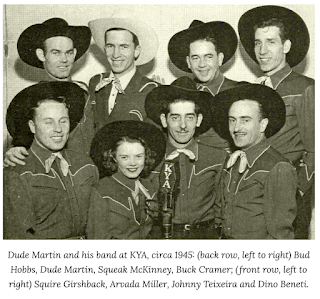 These are incredible audio samples of 1940s radio. They all show a date of August 27-28, 1948. One of the discs includes an Amarillo-area singer named Jimmy Ledbetter, who was the fourth contestant in the station's "Talent Tournament."

On this record you also hear Dude mention that they have been using a mic for "16 years," which would imply that he had been singing since 1932. Dude's first band, The Nevada Nite Herders, first appeared on KLX radio on April 15, 1932. Dude (John Stephen McSwain) would later take his show to television, appearing on the The Dude Martin Show, KTTV Ch. 11, Los Angeles. He died in 1991.

Again, no clue if these are simply home recordings of a radio broadcast, or if they were actual radio transcription recordings. My guess would be home recordings, based on the penciled notations on the labels. Still an incredible find. The outstanding Bay Area Radio Hall of Fame has another sample of his show, on its website.

"Wow -- what a find," museum founder David Ferrell Jackson told me. "Dude Martin is a personal favorite of mine; I have numerous photographs, promotional pieces and recordings of his music from over the years -- but only one aircheck. The odds and ends of Dude Martin on the air are rare, so these are amazing to hear."

On a side note, there IS a Colorado connection to Dude Martin. Eddie Kirk, who often provided the musical backing for him, was from Greeley (but left the state in 1934).

Email ThisBlogThis!Share to TwitterShare to FacebookShare to Pinterest
Labels: ???, Denver