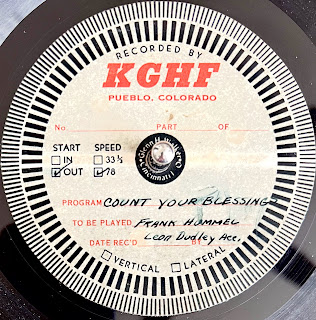 Was driving through the Springs last Friday, and decided to hit a few of my old thrift stops. The city has been kinda hit or miss lately, at least for esoteric Colorado vinyl finds, but took a chance before heading back up to D-Town.

Glad I did. Take a look at this find from KGHF radio, in Pueblo!

You may remember the story I published a few months ago, on the first Pueblo radio stations. KGHF went on the air in 1927, and stuck around until 1964 (later becoming KKAM). No date on this recording, but the tune "Count Your Blessings (Instead of Sheep)" was popular in 1954, as a song included in the movie "White Christmas."

The disc was in atrocious condition. You could barely hear anything, over the surface noise, but I had to at least attempt to clean it up.

The flipside of the disc was a cover of "My Best to You," a 1942 Gene Willadsen and Isham Jones composition recorded by Slim Whitman, the Sons of the Pioneers, and others. Sadly, this side was audibly beyond repair. 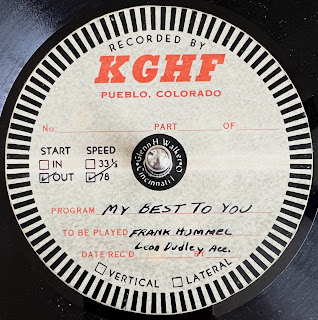 As for the performers - vocalist Frank Hummel worked at CF&I, with his wife Cora. According to Cora's 2018 obituary, the couple moved to Fort Morgan, and later Greeley, in 1960. Leon Dudley was very well known in Pueblo. While he was visually impaired, he was a regular entertainer at The 85 Club and The Broken Dollar, and later at La Renaissance restaurant. He often performed live on KGHF, along with ragtime performer Max Morath. He passed away in 1992.