So during the holiday weekend, I ventured over to Loveland, to check out a row of antique stores, and hit the local big Colorado thrift chain store out that way.

Found a massive stash of Colorado LPs for my ever-growing, oh-my-God-will-it-ever-end, collection. Spotted a large stack of 45s and, of course, as a matter of due diligence, began sifting through the Barry Manilow, Dionne Warwick, Christopher Cross, and Air Supply singles (obviously this particular donator was in to mellow 70s sounds).

In between the adult contemporary radio playlist, I spotted a local-pressed single from Iowa, on the IGA record label - a group called the Scavengers.  I immediately grabbed the iPhone to search for more on this unknown-to-me record.

IGA Records label (IGL is an acronym for the Iowa Great Lakes Recording Studio) began in 1965, in Milford, IA, by Cliff Plagman, John Senn, and Roger Blunt. Apparently they were quite prolific, releasing an estimated 150+ singles, and 40 LPs, to their credit. Some pretty amazing garage band singles came out of there, including those by The Rockers, The Fowl, Billy Rat & The Finks, Fifth Generation, X-Men, The Noblemen, The Mad Hatters, Torres, Liberty Street Ferry, and The Cyclones. 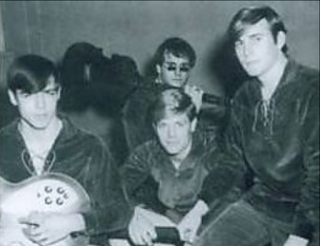 Upon getting back to my turntable, I heard a fun teen vibe, with a heavy Byrds influence on "But If You're Happy." 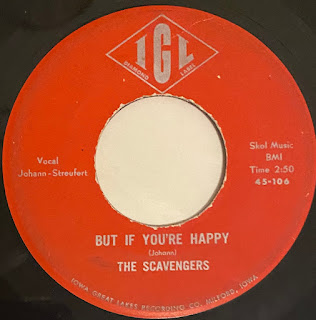 Listen to "But If You're Happy"

It's obvious who these guys were listening to, as the flip side borrows heavy from the Beatles (note the "Day Tripper"- like riff on "It's Over.") 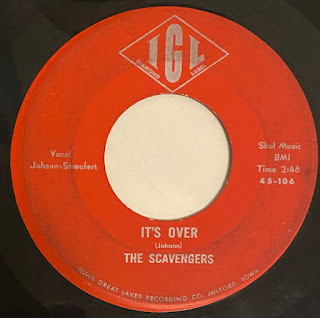 Listen to "It's Over"

Both records were included on the 1994 Arf! Arf! CD release The IGL Rock Story - Part One (1965-1967). There is also a mention of this single in Mike Markesich's outstanding Teen Beat Mayhem. I then quickly discovered that the record is considered a "rare garage band" find, commanding between $80-100. For my $.50 investment (and since I assumed it didn't have a Colorado connection), I thought this would be a good candidate for the eBay pile.

But hold your horses, Lisa...

In further researching the band, I found out that, in 1966 (shortly after the release of their single), the band members relocated to...Colorado. Members changed the group's name to The Pillars, and toured up and down Denver and Colorado Springs.

I couldn't find any Colorado newspaper stories or ads on the band. Usually I find, at least, one print ad for a concert, but I found nothing. In the group's bio, on the Iowa Rock and Roll Hall of Fame site (the band was inducted in 2006), it too also mentions that the members later (briefly) relocated to Colorado, before returning back to Iowa.

The Scavengers disbanded in 1967.

As luck would have it, I have friends in the Sutherland, IA area, who know the family of one of the band members. Hope to have more info, as soon as I can nail it down.