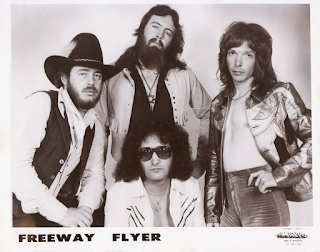 
I truly believe Phil Head is one of the most interesting people I have ever interviewed. Seriously. I’ve been talking to him, about his incredible music career (The Cobras, The Trolls, The Frantics, Waco), but I had never chatted with him about his time in the LA-based band, Freeway Flyer.

“So I was in the band Waco, with Joe Ellis, after his brother Ron (both formerly of White Lightnin') left the group, to go to college. We were playing lots of gigs in Pueblo, including opening for Canned Heat,” he said. “Joe and I were living out in Black Forrest, and one day we just decided we should go to Los Angeles, and try our luck out there.”

“Joe went out to L.A. before I did, and he got into a really bad car accident. An oil tanker hit the van, and flipped it. Thankfully he, and all our equipment, survived.”

Safe on the West Coast, the band hooked up with a former bandmate of Phil’s, who suggested they change the name of the group.

“Max Byfuglin, who I knew in the Frantics (former lead singer), was our manager. He liked the name Freeway Flyer, so we just went with it.”

But not all of Max’s ideas were universally accepted by the band. “Max had this idea that we dress like all disco. I liked to wear a cowboy hat, but I think it made the group look too much like a country band.”

Phil recruited another Pueblo musician, John Withers, to come out and play keyboards. With a drummer (Phil) and bassist (Joe) in the band, the group needed a guitar player.

"We were friends with the guys in Whitehorse. They played around Denver, and they would always come out and see me, when I lived in Wetmore. We knew about Bob Deal, who was a helluva guitar player,” he said. “Bob told us that he wasn’t happy in Whitehorse, and so I recruited him to join us, in Freeway Flyer. I remember he wanted us to always call him “Zorky,” I’m guessing because he didn’t want his real name associated with the group. Who knows.”

With the lineup complete, Phil, Joe, John, Bob and Jerry soon hit the road, playing military bases, with a diverse set list… when the entire band managed to show up, on time.

“We had this gig, in Point Mugu, and Bob and Jerry were going to come up, in a separate car,” Phil said. “So just before we go on, we get a call from Bob, who tells us they took the wrong exit, and were in Bakersfield, which is like two hours away!” So me, John and Joe had to carry the first set off, just the three of us. Bob and Jerry finally showed, for the second set.

Of course, you can’t have a band story, with at least one member getting homesick.

“Jerry and I were driving somewhere, and he tells me that he wants to leave the band, go back to Colorado, and learn how to fly airplanes. I wasn’t upset, I mean you have to follow your dreams. Sadly, several years later, Jerry would be killed in an airplane crash, trying to fly out of Aspen.”

Phil told me that shortly before Jerry left the band, he and the group went into a studio and recorded an original Jerry Albo composition,” 389,” which was never released. “It was a really good song. I’m sure I have a copy of it, somewhere.”

While, for the most part, Freeway Flyer was a pretty laidback band, Bob Deal insisted that the group rehearse.

“John had access to this club in Burbank, called the Stone Crow, so we would go there and rehearse, from 3-6:00 a.m.. Then Bob found a place to rehearse on Sundays, in exchange for playing at the club, in the afternoons.”

Chaos continued when Bob Deal’s wife kicked him out of the house (allegedly for keeping company with several of their female fans). “He had no money, no place to live, so he slept at my house, for a while. He later moved in with Joe. He got kicked out there, too. It was discovered that the couch Bob was sleeping on gave someone crabs, who sat on it.”

While Bob was wearing out his welcome with most of the band members, he and Phil would often collaborate on ideas for the group.

“He told me that I really should have a drum riser, but I didn’t have any money to buy one,” Phil said. “Bob told me that we could make one with milk crates and plywood. So one day this truck pulls up, with a big sheet of plywood, and Bob showed me how to make a riser.”

As was typical in the mid 1970s Los Angeles club scene, Freeway Flyer would often share a venue stage with other up and coming bands, trying to make a name for themselves. “One night, we were playing in the bar, at the Orange County Airport. The setlist included ‘You Really Got Me,’ by the Kinks. After the show, this guy comes up to me and says, ‘The band on before you played it better.’ I got kinda pissed of the nerve of this guy. So we go back into the dressing room, and the bands who play there sign their names on the wall. I noticed that group who played before us was this band called Van Halen. I never heard of them.”

But Bob Deal had.

“Bob would go on and on about Eddie Van Halen. I obviously wasn’t paying attention,” Phil said. “He was friends with the band.” (NOTE: "You Really Got Me" would end up on Van Halen's debut LP, in 1980, which would go on to sell 10 million copies).

It was around that time that Bob was getting restless.

“He really didn’t like the other guys in the band. He wanted to play originals. He was a loud player, and the club management always complained,” Phil said. “One day he came up to me and said, ‘Let’s start our own band, playing originals.’ I told him I had a family, and mouths to feed, and we had lots of gigs playing covers, but it wasn’t enough for him.”

Freeway Flyer would only last about a year.

“John and Joe got tired of being poor. Bob was sick of doing covers, and I got a job driving a truck.”

A few years later Bob Deal auditioned for a metal band, looking for a loud guitarist. The up-and-coming band needed a name, and Bob remembered an incident that occurred when he was playing with Whitehorse, when one of the other band members called the group "a motley looking crew.” The group stylized the idea, to Mötley Crüe.  Bob’s time with Whitehorse also influenced his decision to change his own name.

“Whitehorse had a female singer named Micki Marz, so he changed his name to Mick Mars,” Phil said.

Phil and Bob didn’t stay in touch, after Freeway Flyer disbanded, however Phil’s son Jody had a brief encounter with the now-platinum selling album guitarist.

“Jody was riding his bike, over by a 7-11 convenience store, and a big black limo pulled up. It was Mötley Crüe, headed to a gig somewhere. My son went up to Bob, who instantly recognized him. He said ‘I remember you, you are Jody.’ Jody told him ‘My dad still plays, but he didn’t make it.’ Bob replied, ‘So what.’”

Phil said he didn’t hold any grudges, until he heard about an interview Bob/Mick did, talking about his early band days.

“He said that he was playing in a bunch of ‘schmuck bands’ back then. I was pissed. We fed him, and gave him a roof over his head, when he had nothing. That’s the story of my life. Who knows what would have happened if I had taken him up on his offer to form an all-originals band.”

“Maybe I would have been in Mötley Crüe,” Phil laughed.

NOTE:  According to a Mötley Crüe fan site Whitehorse bassist Harry Clay comes up with the name Motley Croo,  late in 1972, but management prefers Whitehorse, named after the bottle of Scotch whiskey. The name Motley Croo is utilized whenever the band shops their original tunes for a recording contract, but to this day, there is a disagreement amongst original Whitehorse members as to whether the band actually ever played any live gigs under the name Motley Croo or not. Whitehorse member (and former member of the Frantics, David Day), teaches Bob the Whitehorse songs while David’s previous band-mate, Kim Sherman (also formerly with the Frantics), fills in as the second lead guitarist for the group during a ten-week tour of Colorado in the Fall of 1973. Bob officially joins the group on stage as lead guitarist in January 1974 at Mr. Lucky’s in Denver Colorado, during another ten-week Colorado tour, when Kim finally leaves to return to Los Angeles where he plays session guitar for Flash Cadillac.
Posted by Lisa Wheeler at 2:53 PM