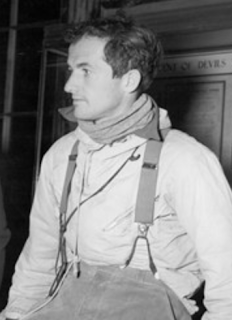 On March 10, 1953 Tenzing Norgay and Edmund Hillary set out to attempt the first ascent of Mount Everest, the highest elevation mountain in the world (29,032 ft). They successfully did so, on May 29.

The story made international news, and was especially of interest to Dr. Jack Durance, a 41-year-old Denver pulmonary physician, who was part of the Karakoram Expedition's attempt to summit K2 (the second tallest mountain in the world - 28,251 ft.), in 1939, at the age of 27. While he was unsuccessful at making it to the top of K2, he did summit the Grand Teton Exum Ridge, West Face, and North Face (later known as the "Durrance Route" on Devils Tower).

In an effort to get a local angle to the Hillary story, KOA radio tracked down Dr. Durrance, who agreed to an interview with Starr Yelland. 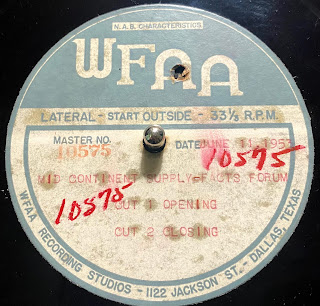 (I found this record at a Denver estate sale. I assumed it was a production disc for WFAA in Dallas  - based on the label - until I turned it over and played the unlabeled flip side.  Notice the "Doc Durrance" reference. Incredible find). 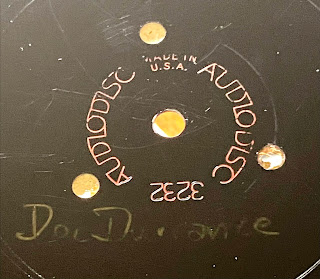 Listen to the KOA interview with Dr. Durrance (7:40)

Durrance became involved in controversy after four members of his K2 expedition died and the expedition leader, Fritz Wiessner, blamed Durrance. A book seeking to shed light on the event, K2: The 1939 Tragedy, was published in 1993. The authors, William Putnam, a former president of the Alpine Club, and Andy Kauffman, a former director, relied on a Durrance diary that surfaced for the first time fifty years after the event to place responsibility for the deaths on Wiessner. Ed Viesturs, in his book K2: Life and Death on the World's Most Dangerous Mountain, revisits all the available documentation and suggest instead that the unplanned decision to decommission all lower camps played a major role in the tragedy. During the 1939 climb, Durrance saved the life of Chap Cranmer who was suffering from pulmonary edema.

Starr Yelland later moved from KOA to KLZ, where he covered all sports including play by play coverage of the University of Colorado Buffaloes football for 28 years. He also was a news anchor for KLZ and later KMGH-TV. He died in 1994. In 2006 he was an inductee in the Denver Press Club Hall of Fame. In 2008 he was inducted into the Colorado Sports Hall of Fame.