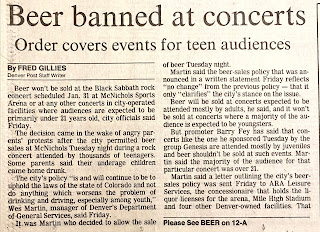 Yes, he really did say that.

On Jan. 31, 1984, Black Sabbath was set to play McNichols Sports Arena. But thanks (partially) to Genesis, the crowd would be watching sans beer.

It was at that Genesis show, held Jan. 17, that several teenagers came home drunk, allegedly from drinking beer, served at the venue. Parents pitched a fit to city and state officials, who immediately told the Denver Post, that beer would only be served at concerts where an expected number of attendees would be adults.

A bit of a back story: In 1984, the enactment of the National Minimum Drinking Age Act prompted states to raise their legal age for purchase or public possession of alcohol to 21, or risk losing millions in federal highway funds. Colorado finally acquiesced in 1987.

Where does Barry Fey come in?

Barry Fey (1938 – April 28, 2013) was the promoter for pretty much every big name concert to come through the Mile High City, including the Black Sabbath show. His history is legendary.  On December 26, 1968 Fey promoted the first Led Zeppelin show in the United States. In June 1969, Feyline presented the three day Denver Pop Festival, which featured the final performance of The Jimi Hendrix Experience. In 1976 Fey's company Feyline started his Summer of Stars concert series at Red Rocks Amphitheater.  In 1983 Fey, Chris Blackwell, and U2 produced the U2 Live at Red Rocks: Under a Blood Red Sky concert film.

According to the Denver Post article, while beer had been sold at other recent Fey-produced events (Willie Nelson and Diana Ross) Fey said the Black Sabbath show would attract many younger teenagers, and agreed with the city's decision not to sell beer at the event.

"Under no conditions should beer be sold," he said. "Categorically, rock and roll and beer don't mix."

The Black Sabbath concert would also be missing another component - Ozzy Osbourne. It would be the only tour to feature former Deep Purple frontman Ian Gillan on lead vocals. The Born Again tour included a giant set of the Stonehenge monument. In a move later parodied in the mockumentary This Is Spinal Tap, the band made a mistake in ordering the set piece. Black Sabbath bassist Geezer Butler explained:

"We had Sharon Osbourne's dad, Don Arden, managing us. He came up with the idea of having the stage set be Stonehenge. He wrote the dimensions down and gave it to our tour manager. He wrote it down in metres but he meant to write it down in feet. The people who made it saw fifteen metres instead of fifteen feet. It was 45 feet high and it wouldn't fit on any stage anywhere so we just had to leave it in the storage area. It cost a fortune to make but there was not a building on earth that you could fit it into."

Here's where it gets fuzzy - according to the Black Sabbath concert archives, the show was moved from Big Mac to the University of Denver arena. I couldn't find any stories related to the change of venue. If you attended, I would love to learn more. 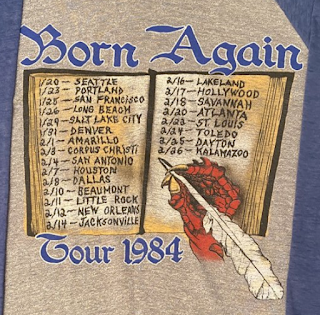