Coming Together with Brownstone (and the Willie Lewis connection) 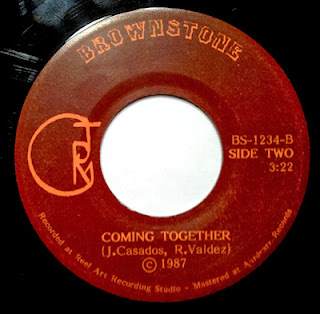 Take a listen to this record

If I hadn't seen the "1987" on the label, I would have sworn this Byrdsy guitar and the folky psych vibe record was made in the 1960s.

As is sometimes the case, I couldn't find anything on this group. I assumed it was a Denver-area record, because of the Aardvark Records mastering notation, but I just didn't know.  Sadly, the folks at Aardvark didn't have any information in their archives. When I originally posted this, in 2013, I asked readers to please help a gal out, and enlighten me on this recording.

I never received a clue - or so I thought.

So I'm going through some old emails today, and I spotted a 2013 note, titled "Brownstone," which apparently (I guess) got lost in my message files.  It was from Willie Lewis, the Denver rockabilly icon, and founder of the Rock-A-Billy record label!

"Hey Lisa, this song was written by Richard Valdez and John Casados. Richard also wrote a number of very nice songs of which I personally had the pleasure of either recording myself or having a hand in helping him to record them. Sadly, he was killed in a automobile wreck a few years ago while he was on his way back home from a day of gambling in Central City, and nothing else of his was ever issued. Really digging this piece of vinyl."

No idea why I didn't follow up with him. Sadly, Willie would pass away just nine months after he sent that email, so whatever else he could tell me, is lost forever.