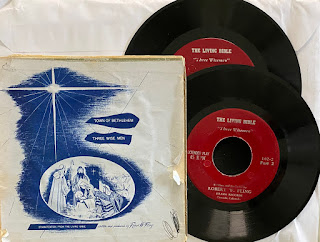 So I'm digging in Boulder, when I spot a beat up 45 sleeve, of what appears to be a Christmas recording. I run into more than my share of religious (and Christmas) offerings, on vinyl, so as I was about to put the sleeve back, one of the two records fell out. I noticed the 45s were from Cascade, Colorado, and it was an artist I never heard of - Robert W. Fling.

Since this is the first Colorado record I have ever found, from the tiny town of Cascade, I was eager to learn more. So I get home and hit the Internet, only to find some amazing history, on Mr. Fling.

The earliest mention of Robert W. Fling was found in a 1926 Colorado College yearbook. where he was an English major, and participated in football, and the glee club.

It was around this time he produced a faith-based radio show. I found a newspaper reference, in 1935, announcing that he was writing and producing a 'living bible" radio series, based out of Chicago. A few other stories indicated that the series would be syndicated, and broadcast across the country.

Another newspaper story, in 1938, noted that he worked for the Standard Radio Company, and later Press Radio Features.

The "Living Bible" series continued for several years, as I found another reference, as late as 1939, that the future episodes would be available to radio stations.

By 1941, he was back in Colorado, where I noted his address was in Green Mountain Falls, located just north of Pikes Peak.

As I mentioned, the records show Cascade, Colorado on the labels, which confirms his location, as the town is just four miles south of Green Mountain Falls. This potentially dates these records around the 1940s time frame.

The records I found were Christmas-related ("Town of Bethlehem" and "Three Wise Men"). If I were to guess, I'm sure there are several other records floating around out there, as part of the series.

The story above indicated that the cast of the show included Harry Elders, Willard Waterman, Jack O'Dell, and Kay Campbell.

Harry Elders, famous for his usher/announcer role on "The First Nighter" show, was later a resident of Palmer Lake. He died in 1993, and is buried in Colorado Springs.

Kay Campbell would later play Helene Benedict on The Guiding Light from 1957 until 1964. She went on to play Rose Pollock on The Edge of Night. She had retired following her role on The Edge of Night but she was coaxed out of retirement by soap opera writer and producer Agnes Nixon, who had created the role of "Kate" especially for Campbell, on the soap opera All My Children. She portrayed Kate Martin from mid-1970 to her death in 1985.