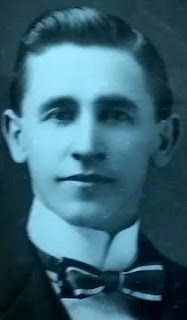 Continuing the political theme from the last post. I wanted to write about the very interesting story of Colorado Springs dentist, Dr. Arthur Jay "A.J." Kiser.

Dr. Kiser was born in 1871, in Ohio. He graduated from the University of Maryland, with his dentistry degree, in 1894. In spite of having a degree in dental medicine he moved to Cripple Creek, in 1910, to try his luck in gold mining. In 1915 he began to put his degree to use, and opened up a dental office in the Burns Building, in Colorado Springs (NOTE: the building later became the Chief Theatre, it was demolished in 1973).

He and his wife Mary made a home at 31 Boulder Crescent, off of Platte Avenue,  right next to Monument Valley Park. 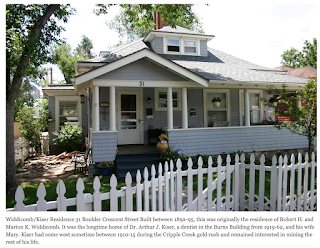 As if being a licensed dentist, and a former gold miner weren't interesting enough, Dr. Kiser was also a poet. He started writing poems during his regular trips to Calhan and Simla, to treat rural patients.

It’s estimated that he wrote more than 5,000 poems, in his lifetime.

A staunch Democrat, he often put his political thoughts into prose. It's not known when or how he decided to turn his poems into songs. He would team up with Russian composer Edouard Heselberg (the father of Hollywood actors Melvyn Douglas and George Douglas, and great-grandfather of actress Illeana Douglas [granddaughter of Melvyn Douglas], who wrote the music to his lyrics. 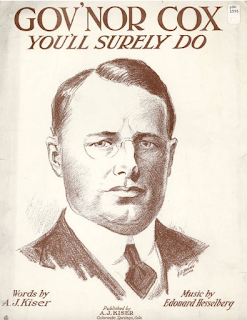 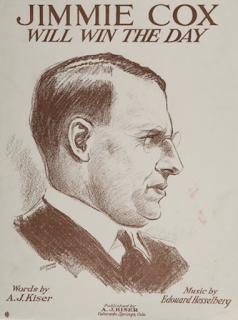 Dr. Kiser was a avid supporter of Ohio Governor James Cox, who ran for President, in 1920. Cox's running mate was future president, then-Assistant Secretary of the Navy Franklin D. Roosevelt.

"Gov'nor Cox, You'll Surely Do" and "Jimmy Cox Will Win The Day" were written as campaign support songs. No idea whether they were ever used at rallies, or if the candidate ever heard the compositions.

Democrats turned the Republican 1900 slogan, “A full dinner pail,” against them in this song supporting James Cox in 1920. After two terms with Woodrow Wilson, why change back to a party that offered “hot air” and promises with “false bottoms?” the cartoon cover art (below) asks. 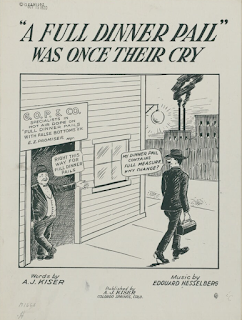 Republicans had men of note
E’er Democrats did get their goat
In office they were very sly
The Tariff was their hue and cry
They sometimes talked of weal and woe
And sometimes of the poor man’s dough
Full dinner pail was once their yell
And for it all the workmen fell.
It took the workmen many years
To wake up and remove their fears
That if the party did not win
They each would be without their tin
Teddy made an awful state
But 1912 sure changed his fate

Chorus
They won, they won like one two three
And I’m happy as can be
Their records great, the ship of state
Files Yankee flags on every sea
The war was one when just begun
The Allies licked the German Hun
The peace was signed, the Germans whined
They dropped the sword, they dropped the gun
France a treaty then was framed
And Wilson sailed with glorious fame
A fight began I hate to say
That thirty senators might win the day
They’re patriots who do not know
That hell’s for sinners down below
Now Judas surely went to hell
So to these men we say farewell


Cox would go on to lose to Warren G. Harding.

Dr. Kiser continued to write political-themed songs, throughout the 1920s. He focused not only on political candidates, but also social change, and war.

Once World War I ended, politicians considered how to craft peace. Democrats favored the League of Nations and diplomacy. The cartoon cover (below) attacked the opposing stance, Warren G. Harding’s “Peace by Resolution,” an independent declaration terminating U.S. participation in hostilities. The devil is seen encouraging Harding to opt for this solution. A similarly diabolical surgeon pronounces that a blind G.O.P. has lost its nerve. After winning, Harding did sign both a resolution for peace as well as a unilateral treaty separate and distinct from the disputed Treaty of Versailles. 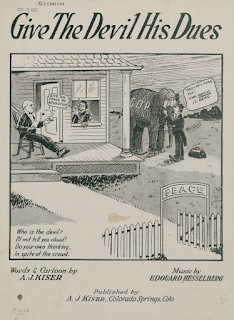 “It is said in holy writing to the devil be unkind
And I wonder if they foresaw What I now have in mind?
I’m for the League of Nations, just as the thing is drawn.
And I’m against a make-shift so I’m singing you this song.
Give the devil his dues, give the devil his dues.
Isn’t he now stalkin’ around in Senator Harding’s shoes?
He says Peace by Resolution, He will sign if he’s a chance
Though one hundred thousand of our boys are laid away in France.
We spent billions in the fight, just to win the ghastly war.
If we make Peace by Resolution, may I ask you what for?
For when the war did first begin, we one and all did say
With all the allies we’ll stick, e’en thou hell might be to pay.”


While politics was the main topic of his published pieces, he would go on to write other compositions, several related to his hometown, Colorado Springs. 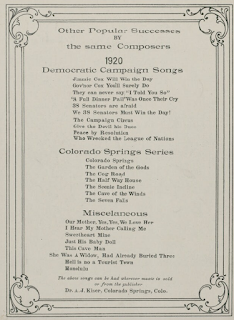 The back of his published pieces of sheet music showed several compositions, in 1920.
(Click to enlarge) 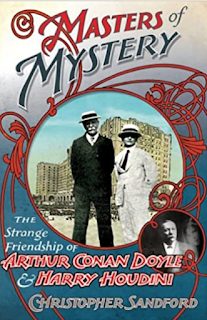 In between writing lyrics, Dr. Kiser wrote several unpublished books, on the afterlife and beyond-the-grave communications. In 1928 he sent a manuscript, of one such book idea, to Arthur Conan Doyle, author of Sherlock Holmes.

"Under separate cover I am sending you a carbon copy of my manuscript, which I regard as a very valuable contribution to the gospel of spiritualistic phenomenon." The correspondence was noted in the 2011 book, Masters of Mystery The Strange Friendship of Arthur Conan Doyle and Harry Houdini, by Christopher Sandford.

According to a history of early Colorado Springs families, "The doctor is a member of the First Spiritualist church of which he is a trustee, while Mrs. Kiser and the children are members of the Catholic church. His political endorsement is given to the Democratic party but he is without desire for office as reward for party fealty. Fraternally he is well known as a York and Scottish Rite Mason and member of the Mystic Shrine and in his life he exemplifies the beneficent spirit of the craft." 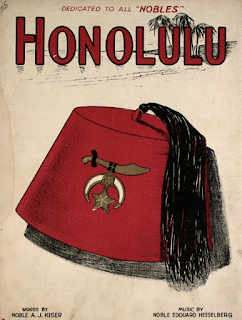 By the 1940s, his lyrics turned more toward World War II fighting songs, with tiles such as "We're Bound to Whip the Jap" (1942, music by Bob Carleton). In 1954 he penned "Waltz Around Me Again, Harry," (assuming this is about Harry Truman, however I couldn't find a copy, to confirm).

I found a listing of his last published song, in 1955, just seven years before he would pass away, in 1962. The composition was entitled "Every Song Was First a Poem." 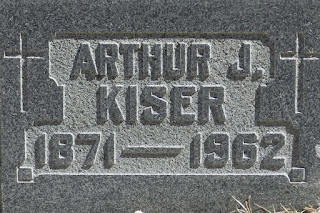