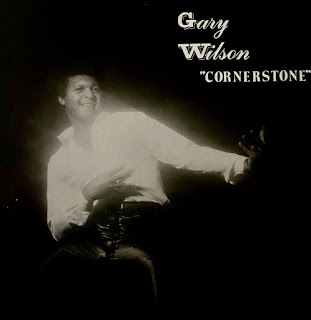 It never really surprises me when I find out that a Colorado record I dig up is worth more than the normal $1.00 I pay for it, at the thrift. In fact, my first thought is, "It's about time!"

I've always felt like I was sailing by myself, in an open sea, when it comes to hyping unknown Colorado vinyl. I never really know if anyone has the same affinity for these often-overlooked recordings, as I, but then I saw this today, on Discogs:

Recorded by Jay Salem, at his Denver studios (you may remember, Jay was in Synchrony, with Sam  Bachica), Cornerstone is a mix of soft soul and jazz-vibe cuts, mixed with 80's catchy beat funk dance numbers.

Gary has an amazing history in Colorado music - growing up with three members of Earth, Wind and Fire (Phillip Bailey, Andrew Woolfolk, and Larry Dunn), and being asked by the late Tommy Bolin to join his band, Energy, with Tom Stephenson (Joe Walsh), Stanley Sheldon (Peter Frampton), Bobby Berge (Buddy Miles), and Bobby LeKind (Doobie Brothers). In 1979, Gary recorded with Rock and Roll Hall of Fame inductee Wilson Pickett, on Pickett's album I Want You - all before he recorded his own (now collector's item) album, in 1983.

Gary is still active in the music industry, according to his website.