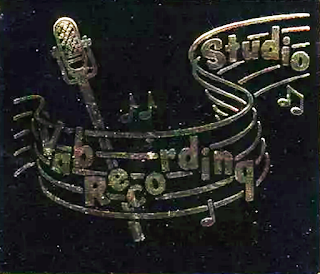 I was digging around Boulder yesterday, and spotted this album. Like I need another polka record in my life, but the amateur cover art just drew me in (pun intended). 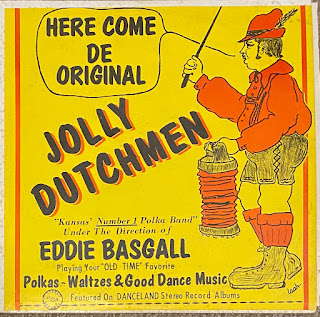 Eddie Basgall and the Jolly Dutchmen, as noted on the cover, were actually from Hays, Kansas (also home to Denver polka legend,  Herman Dinges, who passed away earlier this year). Eddie was well known in polka circles, and was a member of the Bob Hope Radio Show Orchestra and a featured musician with the Bobby Mills Orchestra in the 1950s. He also performed and arranged music for the Six Fat Dutchmen and the "Whoopee John" Orchestra. Later in his career he formed the Eddie Basgall Band, the Danceland Band and the Jolly Dutchmen. 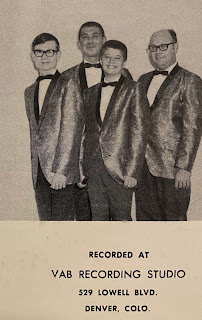 Eddie Basgall and the Jolly Dutchmen
(image from author's collection)

The group also included two of Basgall's sons - Stan (clarinet) and Neal (on drums). The LP notes Jon Kisner (vocals) and Hal Pierce, the host of the popular polka show on KBRN radio, in Brighton (credited on banjo).  Of note, Hal also shows up on the Herman Dinges albums, German Wedding Days and Grand Old Flag.

Soooooo.... what does this have to do with Colorado?

Eddie and his band were one of several groups who recorded in Denver (a five hour straight shot from Hays, KS, on I-70), at the VAB Recording Studios. Owned by John and his wife Vilma "Jerry" Benicken, and located on Lowell Street, in a little house on the Barnum side of town. The home studio was literally polka ground zero, for anyone wanting to make a 45 or album. 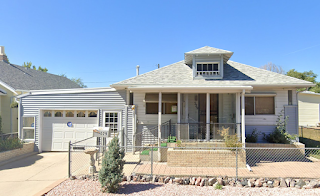 I got back home and realized I owned several albums, and a few 45s, from the VAB studios.

NOTE: Again, not a complete VAB album discography - just a sampling. The list below notes records with obvious credits to VAB:

Herman Dinges
VAB A8-64 – German Christmas Carols & Folk Songs
VAB A10-64 – Cheerio
VAB 66 - Old and New Favorites (red vinyl)
VAB 66 - Round N Round with Herman Dinges
VAB 68 - Colorado is Paradise
(NOTE: quite possible other Herman Dinges LPs were recorded at VAB, but there is no obvious notation, on the others I have)

Cindy Quint and Her Polka Band
No label number

John Benicken passed away in August, 2006. Vilma passed away, shortly thereafter, in October, 2006.
Posted by Lisa Wheeler at 1:31 PM