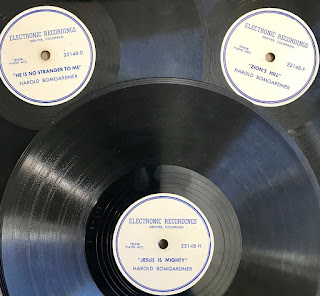 Digging though my Colorado vinyl obscurities - I find these three 78rpm recordings from operatic tenor, Harold Bomgardner, on the Electronic Recordings label, out of Denver. Once again, the story behind obtaining these finds is fuzzy, but they appear to be from a collecting stage in my life, when I was amassing obscure Colorado 78rpm recordings (still am).

I found early school-era references to Harold in Kansas, in the 1920s, where he was active in the glee club. He later attended Hays Teacher College, in Hays, KS. Sometime after college, he ditched the idea of a teaching career, and moved to New York City. I found a reference to him as a former student of Maestro Enrico Rosati (who also coached Mario Lanza). Further digging confirms he was a performer at the Metropolitan Opera, in New York City, and appeared on Broadway, in the 1930 musicals, The Chocolate Soldier, the Prince of Pilsen, The Serenade, and the Count of Luxembourg, as well as the 1931 production of The Student Prince. A 1936 Manhattan, KS newspaper called him  "...one of the greatest singers in America, today."

Sometime after his opera and Broadway musical career, Harold found the Lord, and hit the tent revival circuit, performing throughout the Midwest United States, and Canada. I found a 1935 ad for his appearance, at a Des Moines, IA revival, with The Rev. E.W. Kinnel.

As for his Colorado ties, I dug up a 1938 Richmond, Indiana newspaper which noted him as a "Colorado Springs choir director," one of the earliest references I  have to him living here. 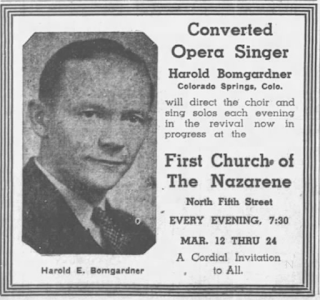 The 78rpm recordings I have show a catalog number of 22148, so I'm wondering if these may have been recorded in 1948, given his home base, at the time. I couldn't find any reference to Electronic Recordings, in Denver. These 78s appear to be from a box set, as I have D-E, F-G, and H-I. All are classical, faith-based recordings, accompanied by a piano. 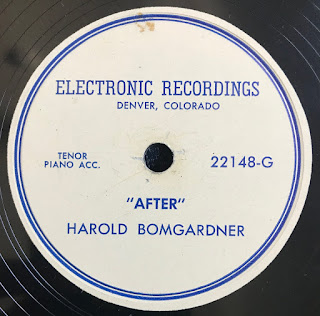 Hear a sample of "After"

The last reference I find of Harold, in Colorado, was in the 1960s. I found numerous credits as a wedding singer, in matrimonial announcements, in the Colorado Springs Gazette-Telegraph.