The Singing Sands of Alamosa 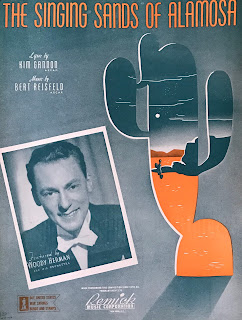 Hey all! Hit a local thrift, over the weekend, and spotted this sheet music (yeah I know, like I need one more esoteric Colorado music-related item, to collect).

"The Singing Sands of Alamosa" was written, in 1942, by Kim Gannon and Bert Reisfeld, and was recorded by numerous folks, including Bing Crosby. The sheet music above shows bandleader Woody Herman. I've seen another copy, of this exact same printing, featuring bandleader Bobby Byrne's picture. 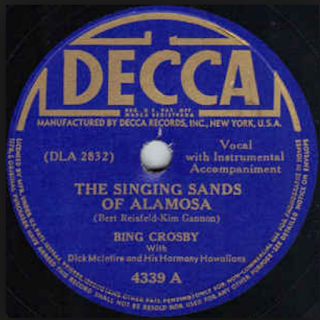 The record came out around the time Western-themed songs were all the rage. One Billboard review notes: "Another song of the wide open spaces, this one about the sands in the heart of Colorado."


In the heart of Colorado, there's a canyon every lover knows,
Where the dessert sands sing love songs, every time the wind blows.
The singing sands of Alamosa sang tenderly the night we found love was ours,
Deep in the sands of Alamosa the angels hid a song a mid the dessert flowers.
But since you said goodbye, there's no music
Just a ghost of what used to be 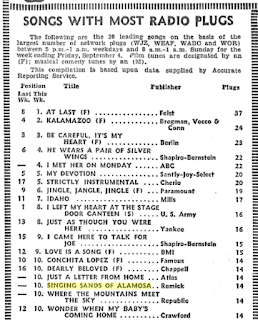 
The melodic wonder is located in the Great Sand Dunes National Park. The fine granules make an audible vibration, when the mounds compress the air within the moving sand. Eyeball this video.