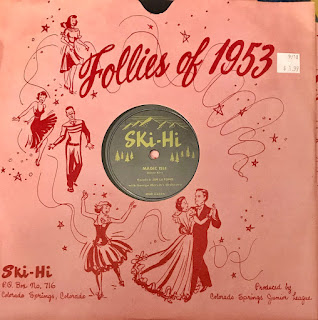 So it's the day after Christmas, and I'm diggin' at my area used record chain. The obscure Colorado vinyl finds are nonexistent (I truly think I have drained this particular store, dry).


As I head toward the door, I spot four pink 78rpm sleeves, at the very bottom of a tall shelf. I'm not in any hurry, so I plop down on the floor, to see what the mystery holds.

I truly don't remember my initial reaction. I don't think shock covers it. First off, they were all from Colorado Springs (note the Colorado Springs Junior League at the bottom right corner and the Ski-Hi record label address, on the left bottom corner), and it was a record I didn't have (surprise, surprise). The sleeve is stunning, and the vinyl is minty mint. Not a mark on it. And that label.... holy cats.

All four of the discs were the same recording, and I couldn't get to the cash register fast enough, to plop down my $8 for all of them. 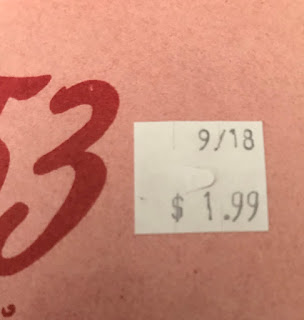 (Yes, I noticed that they had been at this store, since September)

I get home and immediately head to the turntable, where I discover this end-of-the-year score is one of my favorite Colorado finds of 2018. 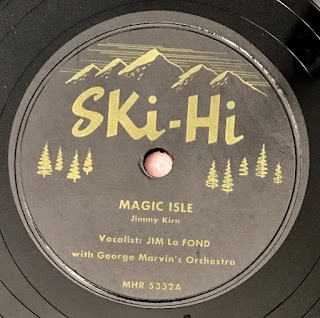 Listen to a sample of "Magic Isle" (1:00)
Vocalist Jim La Fond with the George Marvin Orchestra
Ski-Hi MHR 5332A

I hit a dead end, finding information on Jim La Fond, but I was very familiar with Colorado Springs band leader George Marvin, who backs up the singers on the record.  I have dug up several of his records, in and around the local Springs used record stores and estate sales. George moved to Colorado Springs, in 1946. His George Marvin Trio played jazz across the country, in the late 1940s and early 1950s, before he moved back to the Springs, for regular appearances at the Village Inn, Embers Steak House, and the Falcon Room, in the old Antlers Hotel. He also was a regular performer with Max Morath, in his Cripple Creek melodramas, and performed with the Bob McGrew Orchestra, the Tom O'Boyle Trio and other groups at the Broadmoor, including a Dixie Jazz group he formed called the AristoKats. He retired in 2000, and moved to Florida. He passed away in 2006.

The flip side of this record? I pretty much lost it, when I heard it. You know how I gush about any Coloradocentric lyric recordings: "My name is Molly Lou, and I'm from Cripple Creek..." 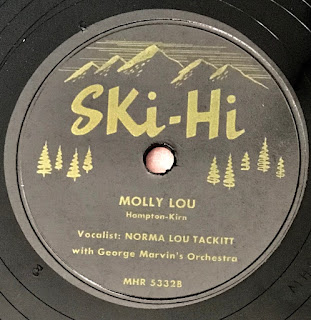 Listen to a sample of "Molly Lou" (1:00)
Vocalist Norma Lou Tackitt with the George Marvin Orchestra
Ski-Hi MHR 5332B

An Internet search finds that Norma Loy Tackitt (note middle name on record is "Lou") was ragtime pianist Max Morath's first wife. She was originally from Eldon, MO, and was a 1956 graduate of Colorado College. 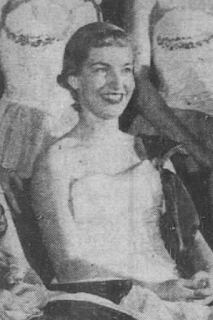 
Norma and Max married October 23, 1953 - just a few months after the record above was recorded. In the 1980s, the Moraths archived turn-of-the-century women, who composed ragtime music - a group missing from the genre's history books. After going through thousands of pieces of sheet music, the two learned that a woman composers were frequently identified only by initials. As a result of their findings, Max Morath recorded an LP, The Ragtime Women, on Vanguard. 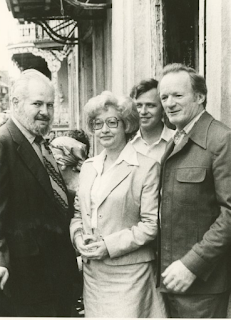 Norma and Max divorced in 1992. Max Morath was inducted in the Colorado Music Hall of Fame, in 2016. He married author/illustrator Diane Fay Skomars, in 1993, and the two co-authored Max Morath: The Road to Ragtime.Max currently lives in Minnesota, and is 92-years old (2018).