So I'm digging around through some old Colorado Springs newspapers, when I spot something interesting - a 1970 mention of the Denver record label, Band Box.

The story mentions that a local teen won a trip to Europe, as the top place winner in the Talented Teen Foundation competition. But what grabbed my interest was a small mention, well into the story, that Band Box Records awarded a recording contract to two local bands, who were also in the competition - the Widefield High School Cantina Brass Band, and the Young Musicians of American Accordionaires. 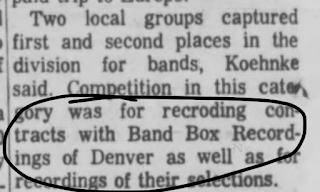 What's interesting about this story is the fact that Band Box had pretty much stopped recording, by this time. The last known Band Box record was made in 1969, according to Band Box historian Craig Swank. This 1970 story indicates that "recordings of their selections," by Band Box, would also be part of the prize package. Did this mean there were actual records pressed? Could THESE be the last records ever made by the label?


A few years ago, I found an advertisement, in a March, 1971 Billboard issue - a notice that the Band Box label, and all of its master recordings were for sale (it was part of this story). I now know that, because of this latest 1970 newspaper article find, this For Sale advertisement was placed nine months after that band contest story.

Sadly, the records were never made.

I located Dave Brody, one of the members of the 1970 Widefield High School Cantina Brass Band, who told me, "That recording was never made. We were supposed to tour Europe, as well, but we were unable to raise the needed money." I also had it confirmed that the second place winner, the Young Musicians of American Accordionaires, did not take Band Box up on the offer to record the group. "The YMA did not ever record with Band Box," says Kim Christian, the daughter of Mike Aman, the director of the group.